TurkishPress
Home News Policing in France, US comes under UN scrutiny in 2020 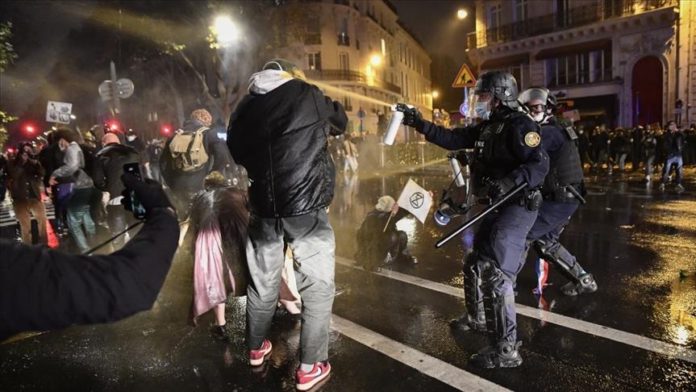 When the world marks International Human Rights Day every year on Dec. 10, rights advocates normally focus on injustices such as police brutality against protestors.

When this involves a UN Security Council member, debates in Western media typically center on Russia or China.

This year was a little different, however, with two other Security Council members attracting attention from UN-supported bodies and experts.

France and the US came under scrutiny from human rights defenders for the actions of their police forces or laws that give police power, particularly regarding policing and their Black communities.

Most recently, demonstrators took to the streets across France in The March of Liberties to protest police brutality and a new security bill making its way through parliament.

In France, police also receive many complaints of Islamophobia and anti-Semitism and criticism of the ferocity with which they tackle Islamic extremism.

On the streets of Paris and other major cities, the motto “Stop the Security Law” motto took hold among demonstrators, similar to protests in the US against police violence against African Americans which triggered the “Black Lives Matter” movement and slogan.

Human Rights Watch (HRW) said French police have used excessive force during sometimes violent demonstrations since late 2018, causing injuries to protestors who were not engaged in violence. It said that an 2019 protest law risks undermining the right to freedom of peaceful assembly.

Frustration with police conduct in France was catalyzed in recent weeks by the brutal beating of music producer Michel Zecler, a 41-year-old Black man who was accosted by three officers on Nov. 21 at a Paris studio.

Human rights experts reporting to the UN stepped in on Dec. 3 and said France’s recent controversial security bill would be incompatible with international human rights law and needed sweeping revisions.

Addressing one of the most controversial planks of the law, the experts said in a statement: “It is a good sign that members of the Parliament have said they will rewrite Article 24 restricting the publication of images of police officers, but it needs to go further and rethink the purpose of the bill as a whole.”

“Simply rewriting Article 24 will not solve its flaws, and the provision is certainly not the only one that infringes on fundamental human rights.”

They said the draft “global security law” last week prompted tens of thousands of people to protest in cities all over France.

Protesters were also angry about videos showing police violently breaking up a migrant camp in the heart of Paris on Nov. 23 and the beating of the Black music producer by police officers.

“These are very timely reminders that images of police abuse captured by the public play a vital role in oversight of public institutions, which is fundamental to the rule of law,” said the experts.

On Dec. 4, UN human rights chief Michelle Bachelet said that she was concerned at the use of force and violations by security forces in Belarus since the country’s contested August election and alarmed at allegations of torture and degrading treatment in custody, with up to 2,000 complaints.

But Yuri Ambrazevich, Belarus’ ambassador to the UN Office at Geneva, claimed his country’s human rights did not require special attention, using arguments similar to those cited in both the US and France, saying that not all of the protests had been peaceful.

In response, he said, law enforcement agencies in his country used “detentions and special means.”

He also said that in countries “with so-called developed democracies to the west of Vienna” – pointing to Western Europe – “police violence happens with annual regularity.”

“The protesters in Belarus took to the streets for the first time in 10 years,” he said, adding that, in contrast: “We’ll need many hours to count how many times over the last year the police forces in Germany use brutal force against those who protest.”

From the other side of the Atlantic Ocean, in June, the brother of police brutality victim George Floyd called for the UN to form an independent commission to “investigate police killings of Black people” and violence against peaceful protesters in the US.

Floyd, an unarmed black man, died this May after being pinned down by a white police officer in Minneapolis, Minnesota, sparking protests in more than 300 US cities and many others across the world.

“My brother George Floyd is one of the many black men and women that have been murdered by police in recent years,” said Philonise Floyd, addressing the UN Human Rights Council from the US via video link.

But his call for an independent investigation failed to get enough support by the council.

On June 19, the council instead condemned racially discriminatory and violent practices by law enforcement agencies against Africans and those of African descent, particularly those which led to the May 25 death of George Floyd.

The resolution, revised from an earlier one proposed by African countries that singled out the US, was passed by the council by consensus, and called for a report on systemic racism and violations of international human rights law against Africans and people of African descent.

The resolution expressed alarm “at the resurgence of violence, racial hatred, hate speech, hate crimes, neo-Nazism, neo-Fascism and violent nationalist ideologies based on racial or national prejudice, including the resurgence of racial superiority ideologies that incite hatred and violence against Africans and people of African descent.”

The 47-member state council held a special debate, but the US did not take part.

The Trump administration withdrew the US from the council in 2018 over charges of alleged bias against Israel and allegations that the body serves as a protector of rights abusers.

“Police abuse remains one of the most serious and divisive human rights violations in the United States,” according to Human Rights Watch.

“Police or public officials greet each new report of brutality with denials or explain that the act was an aberration, while the administrative and criminal systems that should deter these abuses by holding officers accountable instead virtually guarantee them impunity,” said a statement by the group.