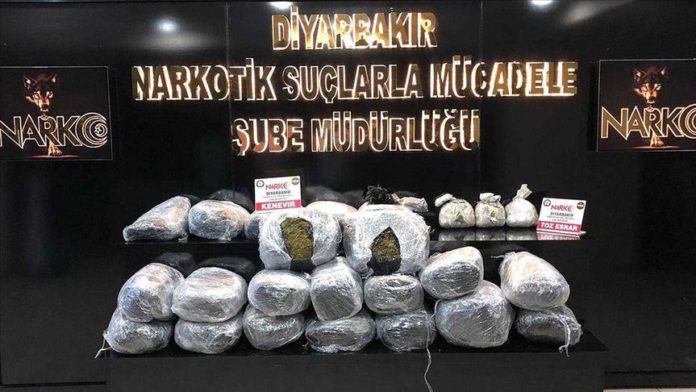 Local police in southeastern Turkey announced on Friday that they had seized over 1.1 tons (2,425 pounds) of marijuana, 46 kilograms (101 pounds) of heroin, a hunting rifle and three other firearms, arresting 99 suspects over a month.

According to a statement by the Diyarbakir provincial security directorate, narcotic police carried out a total 84 operations between May 12 to June 11 in the Ergani, Bismil, Silvan and Dicle districts.

In the operations, 39 suspects out of 99 were remanded in custody, including a lawyer from Adana Bar Association.

July 11, 2020
BAGHDAD, Iraq  Iraq partially reopened the Mandali border crossing with Iran on Saturday after a 3-month closure due to the coronavirus pandemic. The terminal, in the...

July 11, 2020
RAMALLAH, Palestine The Palestinian Health Ministry on Saturday announced five deaths caused by the novel coronavirus, along with 436 infections. In a statement, the ministry said...

July 11, 2020
ANKARA  Turkey's decision on the status of the Hagia Sophia is about the rights and the wishes of the Turkish nation, the country's president said...