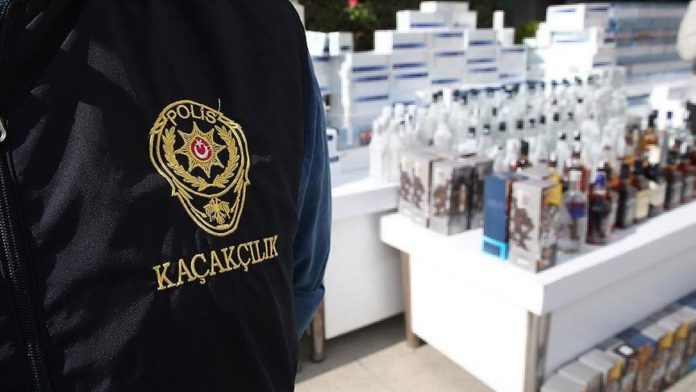 Turkish security forces seized 3,870 liters of ethyl alcohol and 11,903 liters of bootleg liquor Thursday in operations across the country.

Police teams conducted an operation in Akdeniz district in southern Mersin province where 850 liters of ethyl alcohol were seized. Two suspects were detained.

Some 477 liters of ethyl alcohol were also seized in Eskisehir province. Police and gendarmerie teams detained six suspects after inspections.

Meanwhile, in operations carried out by gendarmerie teams in Cigli and Torbali districts in Izmir province, 46 liters of bootleg liquor, 20 liters of ethyl alcohol and materials used in alcohol production were seized.

A total of 10,485 liters of bootleg liquor were seized in two separate operations in Yunusemre and Salihli districts of Manisa province. Four suspects were detained by anti-smuggling and organized crime teams.

Meanwhile, Turkish police conducted an operation in Esenyurt district of Istanbul province. They seized 5,685 liters of bootleg alcohol and some material used in making it and rounded up two suspects.

In northwestern Yalova province, police conducted an operation against a suspect who was trying to supply bootleg alcohol in Cinarcik district.

Some 395 liters were seized in Corum province by the Corum Police Department.

“Security forces launched an operation against the production and sale of illegal liquor after the number of people who died from being poisoned by bootleg liquor rose,” the office of the governor said in a statement.

Some 500 liters of illegal liquor and three tons of ethyl alcohol were seized in operations conducted by police teams in Turkey’s capital Ankara. Three suspects were detained.

Turkish officials have vowed to intensify efforts to combat the production and sale of bootleg alcohol after deaths from poisoning in various cities. Recently, a 55-year-old man who was receiving treatment as a result of alcohol poisoning died in Tekirdag province.

The death toll since Oct. 9 from alcohol poisoning has risen to 50.