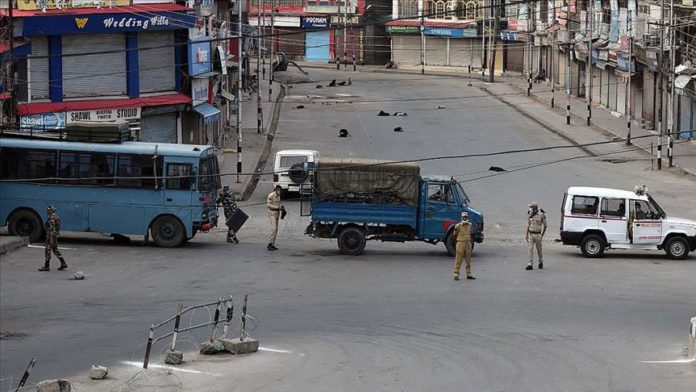 A 23-year-old young man in Indian-administered Kashmir was allegedly killed in police custody Tuesday night, according to his family.

The deceased, identified as Irfan Ahmad Dar of Northern Kashmir’s Baramulla district, was arrested by police at his home at around 12.45 p.m. (0715GMT) Tuesday while his elder brother Javed Ahmad Dar was also arrested by the police on the same day but soon released after his health deteriorated.

A day after his arrest, Kashmir zone police blamed Dar for giving logistical support to militants and claimed he died after escaping from their custody, without giving any convincing explanation about how the man fled from police custody in the heavily militarized region.

Waheed Ahmad Dar, the deceased’s elder brother, told Anadolu Agency that his brother had been killed in cold blood, a claim the police deny.

“Yesterday they police took him away for questioning, giving reasons that some militants came to our home,” said Waheed Dar.

He added that after Javed Dar’s release “we thought they would release him [Irfan] too but alas they released him dead. I saw his body, there were no bullet injuries, he had been hit on his head, which caused his death.”

But in a Wednesday statement, the police claimed that the young man was an over ground worker (OGW) giving logistical support to militants and died after escaping from their custody. The police also said that two Chinese hand grenades were found in his possession.

“During the course of our investigation, a Police Team visited Chairdaji area of Tujjar-Sharief along with OGW for affecting some more recovery on the disclosure of the OGW,” the statement said.

“In the meanwhile, the OGW while taking advantage of darkness and terrain managed to escape … and during search the body of OGW was found near Stone Quarry of Tujjar-Sharief,” it added.

The family is contesting the police claim, saying that Irfan was killed in custody and nothing was found in his possession.

“If they think militants come to our home let them check the camera footage,” Waheed Dar added. “My brother was innocent, he never indulged in violent activity and they didn’t recover any arms from my brother. These are just lies,”

After declaring the young man an over ground worker, the police on Wednesday told the family that their son will be buried in the Sonmarg area of the region, 100 kilometers (62 miles) away from his home.

Noor Mohammad, the young man’s uncle, told Anadolu Agency of his “pain” over the distant burial, adding: “My nephew was innocent. He was killed by torture.”

After “killing him they are denying us his body,” said Mohammad, calling this “beyond barbarism.”

Since the pandemic began, government forces in Jammu and Kashmir region do not give bodies of militants or associates back to their families but instead bury them in places far from their homes.

Mainstream political parties of the region on Wednesday demanded a thorough probe of the killing.

“This excruciating episode has once again served as a grim reminder of how truth is mangled and stories are fabricated to justify killing innocent civilians in Jammu and Kashmir,” a party spokesman said.

Omar Abdullah, Jammu and Kashmir’s former chief minister, expressed outrage over the killing and urged a swift probe into the “circumstances leading to the death.”

He wrote on Twitter that “the administration cannot possibly win back the confidence of the people if encounters like Shopian or suspicious killings like the one that has taken place in Sopore continue to take place incessantly, or are allowed to pass without the facts being established and guilty, when determined fully punished.”

The statement said: “India’s inhuman methods to subjugate the Kashmiri people through killings, torture, forced disappearances and incarcerations have failed in the past and will not succeed in future. The perpetuation of India’s state-terrorism cannot break the will of the Kashmiris or quell their efforts to secure their inalienable right to self-determination as enshrined in the relevant United Nations Security Council (UNSC) Resolutions and international law.”

It also said that the international community must take immediate cognizance of the worsening human rights situation in the region and hold India accountable for its serious crimes against the Kashmiri people.