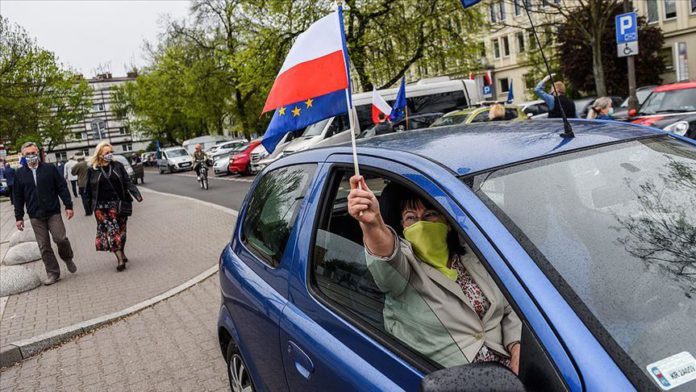 Voters in Poland will head to the polls on Sunday for a presidential election previously delayed due to the COVID-19 pandemic.

People will also have the option to vote for any one of the 11 candidates by postal ballot.

Latest polls show Andrzej Duda, Poland’s incumbent president, is on course to win the first round of the election.

The ruling Law and Justice Party’s (PiS) candidate is expected to get 42% of the votes, with main rival Rafal Trzaskowski, the mayor of capital Warsaw and candidate for the center-right Civic Platform party, projected to get under 30%.

However, if no candidate secures more than 50% of the votes, a second round will be held on July 12.

In an exclusive interview with Anadolu Agency, Hungarian journalist and foreign policy analyst Gabor Stier said a win for the opposition may lead to political turmoil in Poland.

He said the election result will have immense significance for the country.

Underlining that the country’s Senate is controlled by the opposition, he said this was the reason for Duda’s emphasis on stability and cooperation in his electoral campaign.

According to Stier, a win for Trzaskowski is unlikely to create instability in the country, and will only show that the PiS is losing power in Poland.

He said while Duda holds more traditional beliefs, Trzaskowski has a liberal stance on issues such as LGBTQI rights.

The analyst said the incumbent president would be sure to win the first election round if polling went ahead as planned on May 10.

He added that the opposition has not missed any opportunity to criticize the government’s response to the coronavirus pandemic.