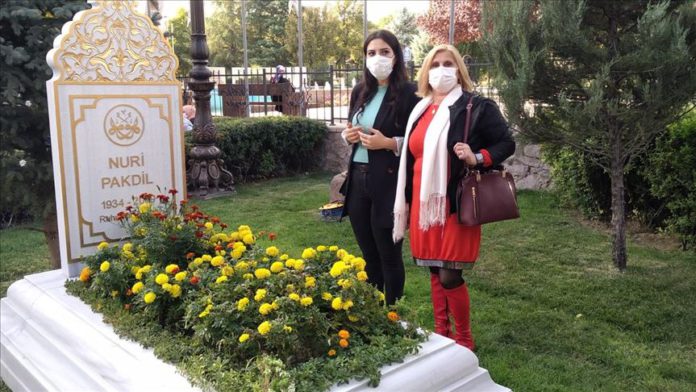 Mahir Unal, vice president of the ruling Justice and Development Party (AKP), Zahir Elbeyk, Jerusalem and Our History Association (KUTAD) Representative in Ankara, as well as Pakdil’s friends and readers commemorated him in the ceremony.

While Unal mentioned Pakdil’s loyalty to the truth and candour, Elbeyk said “Our master fought for Jerusalem with pen and poetry for years, and when he passed away whole Palestine was in grief.”

Many other men of literature, including Palestinian Samir Atiya, Turkish Necip Evlice commemorated him with deep grief and appreciation.

Evlice said “We wish to establish an association after his name in Ankara, so that he will not be forgotten and his name will live on.”

He also added that they have unpublished works of Nuri Pakdil, which they plan to publish in the coming years.

Turkish President Recep Tayyip Erdogan posted a tweet to cherish Pakdil, saying “I reminisce Nuri Pakdil, the exceptional figure of our literature who broadened our horizons with his works on the anniversary of his passing with god’s mercy and reverence.”

Pakdil was a significant figure of Turkish literature who passed away on Oct. 18, 2019, at the age of 85. During his life, he penned down many works that made up 32 books, including plays, essays, poetry and translations from French literature.

He was the founder of “Edebiyat Dergisi Yayınları” (Literature Magazine Publishing) in 1972.

Pakdil’s works were also published in various magazines and he was acknowledged with Necip Fazil Respect Award, a widely-esteemed literature award. in Nov. 2014.

A gifted poet as well, Pakdil was granted dozens of awards by literary communities throughout his life.

In 2013, he was honored with Culture and Arts Grand Award, which was then bestowed by Turkey’s Culture and Tourism Ministry and now by the Turkish Presidency.

Pakdil always defined himself as an Islamist and revolutionist. His motto was “I stand by the religion that stands by labor and freedom.”