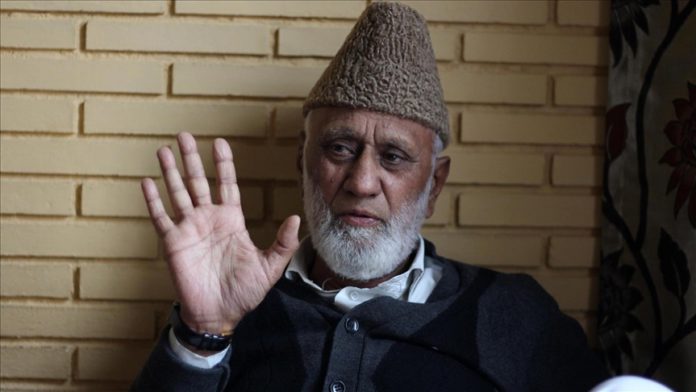 The irreversible loss of hearing was caused years after alleged custodial torture in 2000 in a jail in India’s Jharkhand state, according to his son, Mujahid Sehrai.

A few months before his arrest, he had a cataract operation. But after his arrest, there was no follow-up by an eye specialist, the younger Sehrai told Anadolu Agency.

Police allow him a 10-minute call with his family once a week. But during the brief conversations, much of which goes into exchanging pleasantries, the septuagenarian cannot even fully explain his health condition.

A few days ago, Mujahid said his father complained of not being able to read the Qur’an or clearly identify someone in front of him.

“He said he is losing eyesight and he finds it difficult even to stand up and walk up to the landline phone which is probably some distance away from his prison cell for the weekly call,” said Mujahid.

Even when he was free, the son said, his knee trouble and degeneration of muscles in the legs made walking difficult. The family does not know if he can take occasional walks as advised by doctors.

At the mercy of the authorities

Sehrai’s health concerns have drowned out questions around his detention. Tapped to become the leader of the largest pro-freedom grouping, the Hurriyat Conference — after Syed Ali Geelani — Sehrai had been under detention at his home in the capital, Srinagar, since Aug. 5, 2019, when the Indian government scrapped the longstanding special status of Jammu and Kashmir and put thousands of political leaders and activists in jail, mostly outside Kashmir.

Geelani has been under house arrest for the better part of 12 years but nearly continuously since 2016. He stepped down from leadership of the Hurriyat Conference last year because of differences with Hurriyat constituents parties.

Like hundreds, Sehrai’s detention has been justified under the Public Safety Act, a preventive detention law that allows the Indian state to jail any person for up to three months without a trial. Detention can be extended to six months and then a year.

Only the High Court can quash the detention, but a favorable verdict is no guarantee to freedom because the law can be used repeatedly to keep one in prison.

Pro-freedom leader Masrat Alam has spent 22 years in preventive detention under the law which has been termed a “lawless law” by Amnesty International in 2010.

Sehrai’s family filed in November 2020 an application in the High Court to void his detention. Last week, when the application came up for a hearing, the judge was absent.

Ahsan Untoo, a human rights defender who was one of thousands jailed before or after Aug.5, 2019, told Anadolu Agency that a detainee “is completely at the mercy of the authorities these days.”

“Under the present regime, the laws under which people are detained have become harsher and legal redress difficult. Other forms of relief have also dried up,” he said.

Other forms of relief were usually jail visits by International Committee of Red Cross (ICRC) officials and an occasional assessment of prisoners’ condition in various jails by a visiting team of Kashmir’s largest lawyers’ group, the Jammu and Kashmir Bar Association, said Untoo.

While the ICRC has stopped humanitarian ventures in Jammu and Kashmir, the lawyers’ visits also stopped after the Indian government took complete reins of the region in 2018.

Earlier, a provision of the draconian Public Safety Act prohibited the government from transferring a detainee to a jail outside the region, said Sheikh Showkat Hussain, a former law professor at the Central University of Kashmir and noted political commentator.

That provision was scrapped in 2018 when the Indian government started ruling Kashmir directly. A prisoner can now be sent to far away jails in India so that his family has little contact.

“This is an attempt to make Kashmiri prisoners and their plight invisible to the world at large,” said Hussain.

Ghulam Mohammad Bhat, 65, a longtime member of proscribed religio-political organization Jama’at-e-Islami Jammu and Kashmir, died in jail in Allahabad, Uttar Pradesh in December 2019, about 1,652 kilometers (1,026 miles) from his home in the Kupwara district of northern Kashmir. No family member had spoken to him after his detention on July 17, 2017, or visited.

Pro-freedom leader Muhammad Yaseen Dar of Budgam district learned about the death of his wife only on the day of his release on Aug. 9, 2020, from a yearlong preventive detention.

Akbar is imprisoned in Tihar Jail in New Delhi. He was serving as spokesperson for Geelani.

Sehrai’s son-in-law has been the only person to visit him after coronavirus restrictions on visits were lifted, while his son had a video interaction once from the Central Jail Kashmir.

“My brother-in-law was not allowed to hand a packet of dry fruits to my father. He was told ‘this could become a precedent for others.’ My father is ailing. He needs a good diet,” said Mujahid.

According to the Jail Manual, which dictates rules and conduct for prison authorities and inmates, the prison diet should have meat once a week. But Udhampur jail, where Sehrai is housed, does not serve non-vegetarian food.

Harish Kotwal, superintendent of the jail, told Anadolu Agency the prison has a “common mess” and therefore serves only vegetarian meals.

But families of detainees have regularly complained in the media that inmates do not get adequate treatment in prisons.

According to Untoo, the rights defender, more than 30 pro-freedom leaders, including eight women, suffer from multiple ailments. Most have been housed in jails either outside Jammu and Kashmir or in the Jammu province of the region, which is more than 300 kilometers away (186 miles).

During his detention at the Srinagar Central Jail last year, Untoo said he witnessed the deaths of three prisoners — Ghulam Mohammad Lone alias Papa Kisthwari and Ali Muhammad Kumar, both in their seventies, and Mujeeb Sidiqqui, in his late forties — from health complications he said were not addressed adequately.

While Kishtwari was a dreaded former militiaman alleged to have worked for the Indian army, Kumar and Siddiqui were imprisoned for ordinary crimes.

“We requested jail authorities to revamp the health infrastructure so that a prisoner who develops emergency complications could be stabilized here and then taken to the hospital. I remember Mujeeb bled from his nose several times before jail doctors attended to him and then his condition deteriorated very quickly,” said Untoo.

“Against a capacity of 18, there were 25 prisoners in our cell. I told an official that we are literally breathing into each other during sleep amid the COVID-19 pandemic,” he said.

In August 2020, one in five inmates at the Srinagar Central Jail tested positive for the virus.

The Jail Manual, Untoo said, is “often practiced in breach.”

The High Court in December 2020 reprimanded authorities for delaying updating the Jail Manual, which was adopted in 2000. Before that, the erstwhile state of Jammu and Kashmir followed the manual of Punjab state.

Superintended of Srinagar Central Jail Daljit Singh told Anadolu Agency that the jail’s doctors do refer patients to outside health facilities if the need arises. He said until the updated manual is ready, the prison follows the existing jail manual.

Family members are allowed to meet prisoners once a month after following COVID-19 guidelines.

According to several human rights organizations, thousands have reportedly been killed in the conflict since 1989.​​​​​​​