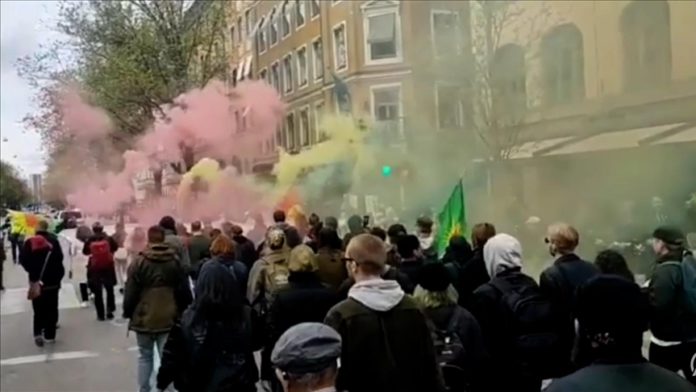 Pro-PKK/YPG protesters on Saturday gathered in Swedish cities chanting slogans in support of the terrorist group in rallies organized to object to the country’s membership in NATO.

Swedish police forces stood aside in Stockholm, Gothenburg and Malmo as the terror sympathizers chanted slogans in support of the terrorist organization.

Such protests by the PKK/YPG were held in Sweden on many occasions in the past and have turned violent against Turkish officials and Turks.

The PKK/YPG/PYD has had an office in Sweden’s Stockholm since 2016, and according to sources, who wish to remain anonymous, the PKK terror group also generates significant income in Sweden through theft, arms trafficking, drug dealing, and racketeering.

The terrorist group is believed to generate its income under organizations such as the NCDK and “Kurdiska Rode Halvmanen.”

Sweden regularly sends official delegations to areas in eastern Syria occupied by the PKK/YPG for talks with terrorist leaders and holds regular meetings with the terror group.

Protests organized by the PKK/YPG are also held regularly in the Swedish neighboring country Finland.

The terrorist group has waged a war against Turkiye since 1984 that has claimed the lives of tens of thousands of people, and Ankara’s criticism of Sweden and Finland over the PKK/YPG support has complicated their plans to join NATO.

The PKK is proscribed as a terrorist organization by the US, EU, UK and Turkiye.