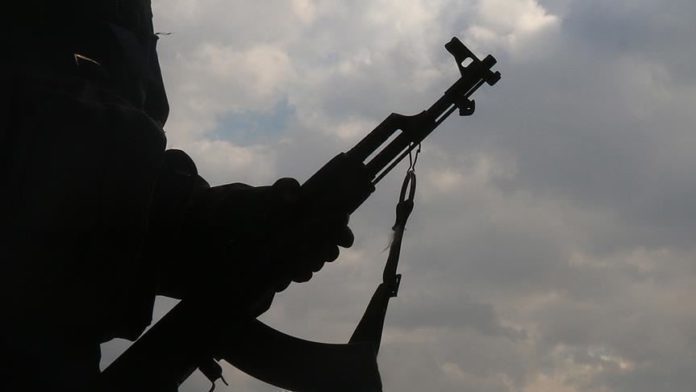 The PKK terror organization that conducted its first terror attack Aug. 15, 1984, has committed scores of massacres and killed many regardless of age or gender.

Security forces, which are destroying terror shelters one by one, day and night, continue to ensure the security of the Turkish people.

As a result of successful operations at home and abroad, security forces have managed to “neutralize” senior members.

In addition, the PKK terror group is nearly eradicated through Turkey’s persuasive efforts which have resulted in the surrender of many of its members.

Despite those efforts, the embattled terror has not hesitated to target civilians to disturb peace and security.

The terrorists have orphaned thousands of children in attacks carried out for years.

They attacked a vehicle of a company June 8, 2020, carrying a worker who was working on road construction in Catak district of Van province.

Two workers were martyred and eight were injured in the attack.

In Van, terrorists attacked a vehicle May 14 carrying a group taking aid to Egribelen district of Ozalp district, which was quarantined as part of the measures to curb the coronavirus.

Municipal employee Yildirim Demir and Kinyaz Karalioglu, who were in the vehicle, were martyred.

On Sept. 12, 2019, roadside explosives planted by the terror group hit a vehicle carrying forest workers in the village of Agackoyu in Kulp district, killing seven civilians and injuring 10.

Killing of baby and mother

On July 31, 2018, Nurcan Karakaya traveled by car with her 11-month-old to visit her husband, Serkan Karakaya, a soldier who was stationed in Yuksekova district in Hakkari province.

On her way home, a roadside bomb exploded, killing them.

On Jan. 22, 1987, the terror group stormed a wedding reception in Ortabag village in Sirnak, killing eight people, including four women and two children. The PKK also stormed a village in Omerli district of southeastern Mardin province and killed 30, including 16 children.

Terrorists raided the village of Pinarcik in Mardin’s Omerli district and massacred 30, including six women.

In its attempts to seize land in the region by spreading fear, the PKK does not hesitate to kill those opposed to the terror group.

The year 1987 went down as one marked by massacres by the PKK. Terrorists attacked Haraberk town of Midyat district in Mardin, on July 8, 1987, and massacred nine — seven of whom were children and two women from the same family. At the same time, another group raided the Pecenek village and shot 16 people.

The terrorists again attacked Sirnak and brutally killed 13, most of the victims were elderly, women and children.

On Aug. 19, 1987, terrorists targeted Eruh district of Siirt province and killed 25 civilians, including two infants. Notably, 14 of the victims were younger than 18.

On May 9, 1988, terrorists targeted a village in Nusaybin district of Mardin province and slaughtered 11 members from the same family — including eight children and two women. In addition, two other children were severely wounded.

The PKK terror organization continued massacres in the 1990s and subsequent years without discriminating between security forces and civilians.

On March 21, 1990, terrorists blocked a road in Kovancilar district in the eastern Elazig province and the terror group’s firing squad killed nine engineers and a laborer.

In the same year, they attacked village guards’ houses in the Guclukonak district in Sirnak and killed 27, including 12 children and seven women.

The terror organization, which also carried out civilian massacres in metropolitan cities, hurled Molotov cocktails at a store in the Bakirkoy district of Istanbul on Dec. 25, 1991.

On July 14, 1991, they raided villages in the Caglayancerit and Pazarcik districts of southern Kahramanmaras province and killed nine, including women and children.

The PKK struck a village in Sirnak on May 23, 1992, and killed four people, including two women and two children.

The PKK terror group raided a village in Bitlis province Oct. 1, 1992, with a group of 100 terrorists. Members of the group, who wanted village guards to lay down their weapons, informed village elders they would not harm women and children. The guards then dropped their weapons, but the terrorists did not keep their word and killed 30 people, including women and children.

In Batman province, terrorists raided a village guard’s house and massacred 10 people. Among the victims of the bloody-minded PKK on June 22, 1992, was a one-month-old.

June 11 that year, PKK terrorists stopped a vehicle in Tatvan district of Van and a firing squad shot 13 passengers.

Known for its hatred of religion, the PKK raided a mosque in Diyarbakır’s Silvan district June 27, 1992, and killed 10 people.

On May 24, 1993, terrorists blocked the Bingol-Elazig highway in the east and killed 33 unarmed soldiers traveling to military units by bus.

Although locals could not bind the wounds of the hideous attack, the PKK attacked Hamzabey in Mardin province June 30, 1993.

The terror group’s firing squad killed 33 civilians in the Basbaglar village of the eastern Erzincan province July 5, 1993, and set the village on fire.

They continued massacres that same year, killing 24 in Van — 14 were children.

On the first day of 1994, the terror group stopped a passenger bus in Maden district of Elazig and shot eight people. The same day they attacked Ormancik and Akyurek villages in Mardin and killed 21, including 11 children.

On Sept. 11, 1994, six teachers were shot by terrorists in Mazgirt district of Tunceli.

PKK terrorists attacked the Hamzali village of Diyarbakir’s Kulp district on the first day of 1995, killing 20, including women, children and older adults.

The terror group, one month later, massacred four teachers who were working in Katranli and Taskesen in Erzurum province.

Terrorists raided Atabinen town of Gurpinar district of Van on July 24, 1995, and encountered resistance from villagers. The terrorists rocketed houses and killed 12 people, including children and women.

The PKK stormed a mine in Hatay’s Samandag district Sept. 5 of the same year and a firing squad killed eight miners. They attacked Hamzali village in Diyarbakir province and killed 20 civilians, including elders, children and women.

The PKK, suffering heavy losses when facing security forces in the countryside, turned to city centers in the 2000s to create an atmosphere of fear and panic.

The terror organization, which started targeting civilians in city centers with suicide bombings, attacked the historical Spice Bazaar, one of the most crowded places in Istanbul, on July 9, 1998. Seven people were killed and 121 were injured in the explosion.

Ankara became the target of the PKK. In a suicide bomb attack May 22, 2007, nine people were killed and more than 100 civilians were injured.

On July 27, 2008, two bombs planted by the PKK exploded in the Gungoren district of Istanbul, and 18 civilians, including five children, were killed and 154 were injured.

On Aug. 5, 2012, PKK terrorists killed three villagers in the Menemen district of the western coastal province of Izmir. Two days later, they attacked a vehicle carrying military personnel in the Foca district of the province. In that attack, two soldiers were martyred and 25 people were injured, including civilians.

In Diyarbakir’s Yenisehir district, on Jan. 3, 2008, the terror group detonated a bomb-laden vehicle in front of a private teaching institution while a military service car was driving in front of the building. The deadly explosion killed seven people, including six students, and injured 73 bystanders.

The terrorists hurled Molotov cocktails at a civilian bus, leading to the burning of the vehicle in Istanbul’s Bagcilar district Nov. 8, 2009.

Serap Eser, a 17-year-old high schooler, was severely wounded in the attack and died one month after the attack.

On Sept. 16, 2010, a mine planted by terrorists exploded when a civilian minibus was driving through the area. The deadly explosion left nine dead — including 2-year-old Nurullah Umut Ciftci and 11-month Zeynep Kurt. Four others were wounded.

Terrorists in Batman on Sept. 26, 2011, highjacked a car. Three terrorists did not obey a “stop” warning from police. Members of the terror group, who tried to escape by opening fire randomly, also fired at a vehicle where Talat Doru and his family were returning from visiting his parents who were preparing for a pilgrimage. Mizgin Doru, mother of four children and who was eight months pregnant, and her daughter, Sultan Doru, were killed in the attack.

Among those killed were Yasin Boru, 16, and two of his friends who wanted to deliver sacrificial meat to neighbors and poor families.

Thirteen-year-old Firat Simpil left home Aug. 30, 2015, to buy vegetables and fruit for his family in the Silvan district of Diyarbakir, but a roadside bomb exploded, killing him.

On Sept. 28, 2015, terrorists attacked a police car with rockets. Elif Simsek, 9, was killed when her house was targeted by the PKK.

Members of the PKK’s youth branch left an explosive in a plastic bag on the roof of a house Sept. 12, 2015. The explosive exploded in the hands of children. One died in a hospital.

On Jan. 13, 2016, terrorists targeted a security dwelling-house in the Cinar district of Diyarbakir province with a bomb-laden car. Seven people were killed, including a police officer and three children.

On March 13, 2016, PKK terrorists attacked Ankara and killed 36 people. The youngest victim was an unborn baby three months from birth.

A mother, two daughters and two grandchildren were killed, 12 injured, five of them police officers, in an attack on a police service vehicle with a bomb-laden vehicle by PKK terrorists in Diyarbakır’s central Sur district Aug. 10, 2016.

Muhammet Fatih Safiturk, the district governor of Derik in Mardin, died at a hospital following a bomb attack by PKK terrorists at his office a day earlier, on Nov. 10, 2016.

PKK terrorists detonated a bomb-laden truck in the village of Durumlu in Diyarbakir’s Sur district, reportedly following an argument with a group of villagers who spotted the vehicle and began chasing it. The blast killed 16 people and injured 23 on May 12, 2016.

The blast was felt by many districts in the city. A 20-meter (66-foot) wide and 4-meter (13-foot) deep pit was formed where the blast occurred. The treacherous attack of the PKK orphaned 36 children.

In the attack by PKK terrorists on July 2, 2017, one road worker was killed and one was injured at a construction site along the Şırnak-Van highway.

PKK terrorists attacked workers who were doing roadwork in the Ortasu Beyaztepe location of Uludere district July 3, 2017. Two workers died in the attack and four were hospitalized.

Eren Bulbul died from gunshot wounds as he was trying to help gendarmerie forces track PKK members in Macka, a town 22 kilometers (14 miles) south of the Black Sea city of Trabzon.