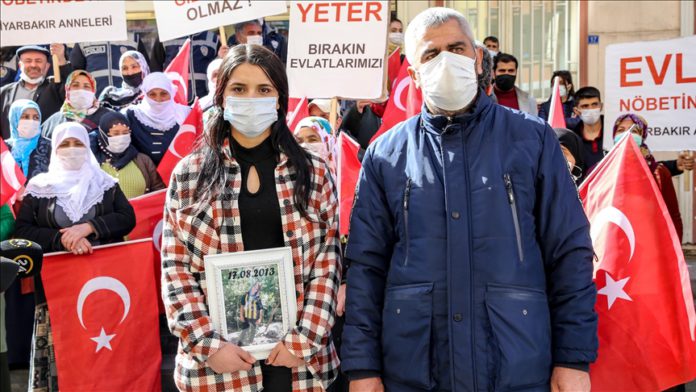 Having grown up together in the same hovel, the lives of two sisters and best friends in southeastern Turkey turned upside down in 2013 when one of them was abducted by the PKK terror group. Now, the young woman’s family is protesting for her return.

“We want her to come back, a lot has changed since she left, we no longer have joy and peace at home. A part of us is always missing,” said Semiran, 19, who joined an ongoing anti-PKK sit-in protest in Diyarbakir province with her father in the hopes of getting her sister, Kadriye, back.

The protest outside the office of Peoples’ Democratic Party (HDP) — which the government accuses of having links to the YPG/PKK — began on Sept. 3, 2019, when three mothers said YPG/PKK terrorists had forcibly recruited their children.

“My sister was abducted in 2013 […] She said she was going to a wedding, but my parents couldn’t reach her after she left,” she said, adding that the family had not heard from Kadriye since then. “Our [parents] got up and went [to the HDP]. They said they didn’t see or know of them [abducted individuals]. It was obvious they were lying. They had already taken my sister.”

To Semiran, her sister was more than a sibling — they shared everything, including long conversations through the night, standing with each other at desperate times. Her unexpected abduction at the hands of the terror group opened deep wounds in Semiran’s heart, the kind of wounds still bleeding even eight years after her sister’s disappearance.

“My sister was a student, studying at an open high school. She said she’d go to university, then study to become a police officer […] She had many dreams, she would’ve studied but they didn’t let her. They abducted her,” she said.

The family searched for their missing daughter for years to no avail. Then, they decided to join the sit-in protest, where at least 24 families had been reunited with their forcibly recruited children who then fled from the PKK, or its Syrian offshoot YPG, surrendering to Turkish security sources.

“We saw it on the TV, everybody’s here. So are we. We came here for my sister. We came with a hope, maybe she’ll hear our voice. We heard that the children of many [families] returned, and we came here, hoping she may return,” she said.

“Sister, if you’re hearing me, see me, come back to us, your family. After you left, we got a two-year-old sibling. This little child looks at your photos, and says: ‘Come back sister,'” she continued, adding: “A part of us is always missing.”

Father Nazmi Turan, for his part, said he and Semiran would not leave the protest until Kadriye is brought back and would keep protesting “no matter how long it takes.” He said the return of other families’ sons and daughters served as a glimmer of hope.

“Who in their right mind would believe that a child at the age of 15 could take a logical decision [about this]? She was first tricked and then taken to the mountains. I miss her so much, our family was hit hard by her disappearance. I hope she comes back and we return to the good times from before she was abducted,” he said.