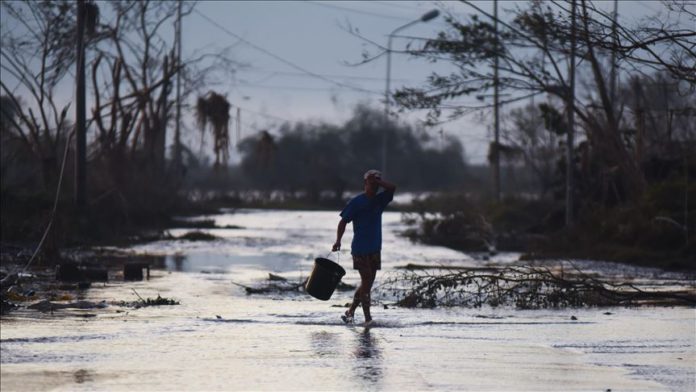 At least 17 people died and tens of thousands others were evacuated to safer places due to the ongoing typhoon in Philippines, state-media reported on Monday.

“Most of the fatalities were either swept away or buried by a huge volume of volcanic materials that cascaded down the slopes of Mayon Volcano as heavy to intense rains pelted Albay,” said Jessar Adornado, OCD division chief for operations.

Philippines chapter of International Red Cross said in a Twitter statement that Virac region has suffered 80-90% damages to residential buildings while its supermarket is “totally damaged”.

“There is still no water, electricity, signal, and gasoline stations are closed throughout the province,” Philippines Red Cross Chief Dick Gordon said.

Officials said the typhoon had wind speeds of up to 280 kilometers (173 miles) per hour and first lashed the country’s eastern island province of Catanduanes, bringing with it heavy rains.

It then made landfall four times throughout the day on the island of Luzon, leading to coastal towns being inundated and rivers flooding and overflowing.

It was downgraded to a tropical storm Sunday evening local time and continues to weaken over the West Philippine Sea.

The OCD report said 108,561 families or 394,859 people living in areas prone to flooding, lahar flow, landslide, and storm surge in the provinces of Albay, Sorsogon, Camarines Sur, Camarines Norte, and Catanduanes have been shifted to safer places.

Turkey on Sunday extended its condolences to the relatives of the victims and people of the Philippines over Typhoon Goni.

The Foreign Ministry said it learned with sorrow about the loss of lives and extensive damage it caused. It also wished a speedy recovery to the injured.