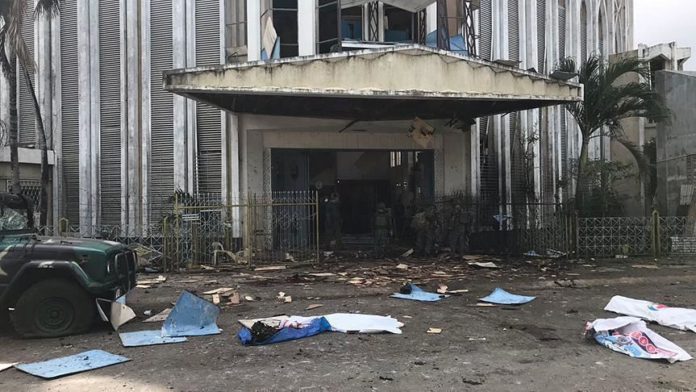 According to Philippine News Agency, the two women bombers were the widows of militants who were killed in 2019.

Philippine Army commander Lt. Gen. Cirilito Sobejana said one suicide bomber Nanah, a resident of Basilan, was wife of the first confirmed Filipino suicide bomber, Norman Lasuca, who carried out an attack against the 1st Brigade Combat Team in Sulu in June 2019, that left seven people dead and 12 others wounded.

While the other bomber, Inda Nay, was the widow of militant Abu Talha, who was killed following an encounter with the 1st Scout Ranger Battalion in November 2019, Sobejana said.

Two explosions rocked the town of Jolo, in Sulu province of the Muslim-majority Bangsamoro autonomous region early Monday, killing at least 15 people, including military soldiers, and wounding more than 70 others.

“The two female suicide bombers are the same targets being tracked by the group of Maj. (Marvin) Indammog before they were killed by policemen on June 29, 2020,” PNA quoted Sobejana as saying.

In June, four Philippine army soldiers, including a major and a captain, were mistakenly killed by police in the same province, who were on a mission to track Abu Sayyaf militant group members and bomb makers in the region.

Following the army chief’s recommendation to place Sulu province under army control, a presidential spokesman Wednesday said President Rodrigo Duterte would take into consideration the proposal to place the region under martial law.

“The president will of course consider this recommendation,” the official new agency quoted Presidential Spokesman Harry Roque as saying during an interview with a local broadcaster.

The region was under a two-and-a-half-year long martial law till the end of 2019 on the pretext of fighting militants.