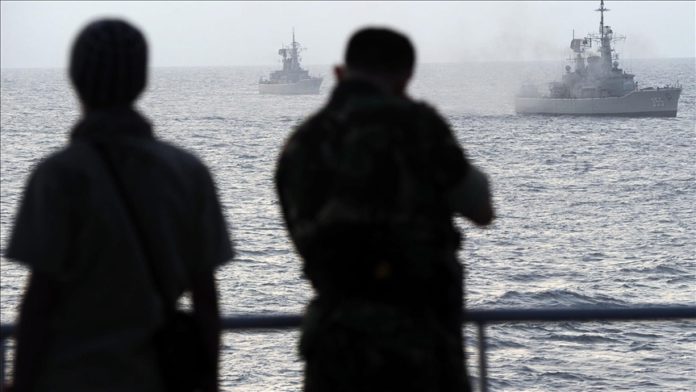 The coast guard said in a statement Monday that its vessel the BRP Cabra reported sighting a ship flying the flag of the People’s Republic of China and with Chinese markings in Marie Louise Bank on July 13 and issued a radio challenge to the ship while monitoring it on radar.

The patrol vessel then moved closer to get a better view of what the Chinese warship was doing in Philippine waters, according to the statement.

“The Chinese ship did not respond, prompting the BRP Cabra to use its Long Range Acoustic Device (LRAD) to repeat the challenge,” it said.

It added that the Chinese ship then started moving out of Marie Louise Bank, with the BRP Capra following it to make sure it left the Philippines’ Exclusive Economic Zone.

The coast guard said that the Chinese ship only sent a radio message when the BRP Cabra was 0.25-0.30 nautical miles away.

On June 30, the BRP Cabra also challenged and drove away five “Chinese ships” and two “Vietnamese vessels” that they monitored in Marie Louise Bank, the statement said.

Since 2016, the Philippines has lodged 128 diplomatic protests over Chinese vessels’ activities in the disputed waters, five of which were filed in 2021.

During a Special ASEAN-US Foreign Ministerial Meeting last Wednesday, the US reaffirmed its stance against Beijing’s attempt to dominate the South China Sea.

US Secretary of State Antony Blinken highlighted Washington’s rejection of China’s “unlawful” maritime claims in the South China Sea and reiterated that it stands with the Southeast Asian claimants in the face of Chinese “coercion.”

An international tribunal in The Hague ruled in favor of the Philippines in July 2016, invalidating China’s “nine-dash line” territorial claim over the South China Sea, but Beijing rejected the verdict.