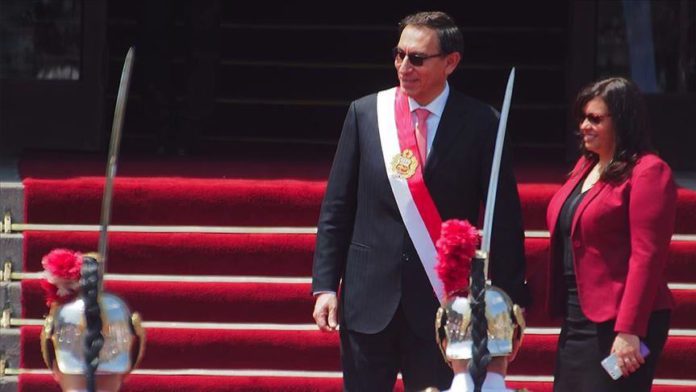 The Peruvian Congress voted Friday in favor of starting an impeachment process against President Martin Vizcarra.

After hours of contentious debate that underscored divisions between the president and lawmakers, the procedure was finally approved by a 65-35 vote, with 24 lawmakers abstaining.

If the vote is ratified next week, it would not be enough to remove Vizcarra for office.

The next session is set for Sept. 18, when it will be Vizcarra’s turn to respond to accusations, including that he lied and obstructed an investigation of an alleged corruption probe.

The debate began after the president of Congress, Luis Merino de Lama, called lawmakers into session Thursday to discuss the proceedings.

It focuses on audio recordings involving Vizcarra in the case known as “Richard Swing — a singer that was hired to give motivational talks to the Culture Ministry. The singer, Richard Cisneros, is accused of using his friendship with Vizcarra to obtain nine contracts ranging from 7,000 soles to 33,400 soles ($2,000 to $9,500), despite lacking experience.

In one recording, Vizcarra appears to admit he met Cisneros several times at the presidential palace during the coronavirus pandemic and instructed his staff to lie about the meetings.

Vizcarra has tried to avoid responsibility for the hiring, although he confessed to have met Cisneros during the 2016 election, in which he ran for vice president under former President Pedro Pablo Kuczynski.

The impeachment motion is not uncommon in Peru, where two similar initiatives were promoted against Kuczynski in 2017 and 2018, which finally led to his resignation.

Vizcarra said in a televised address Thursday the release of the tapes was part of a plot by political opponents to remove him from power.

“We are facing a plot against democracy,” said Vizcarra, who has become known for frequent clashes with the opposition-controlled Congress for his anti-corruption crusades.

The political turmoil threatens to deepen an economic crisis triggered by the coronavirus pandemic in one of the worst-hit countries in the region.