TurkishPress
Home News ‘Perpetrators of Khojaly genocide should be punished’ 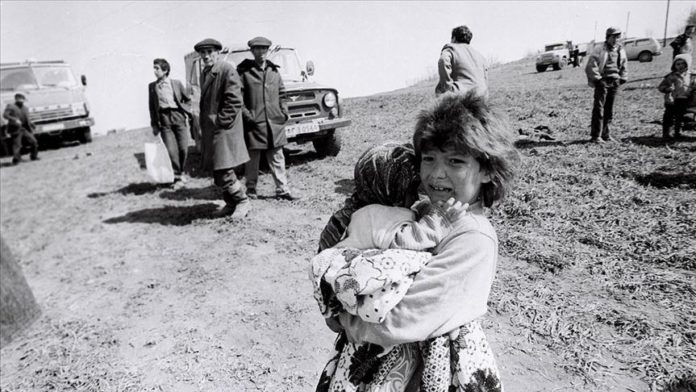 The perpetrators of a 1992 massacre by Armenian forces in the town of Khojaly in Nagorno-Karabakh which left over 600 people dead should be punished, the head of the World Azerbaijani Congress said Wednesday.

Asif Kurban said in a statement that Armenian armed forces, terrorist groups and the 366th Motorized Rifle Regiment of the Soviet Army committed an unprecedented genocide against civilians by violating all international legal norms and human rights.

Kurban said 613 people were killed and 87 were left disabled.

“The images that were taken at that time and the stories of the survivors of the massacre show that there was a real genocide in Khojaly.

“Also, a document presented by 30 members of the Parliamentary Assembly of the Council of Europe signed on April 26, 2001, the report prepared by the Memorial Human Rights Organization on Khojaly and the reply letter of UN Human Rights Organization President Holly Cartner to the Armenian representative in 1997 prove that the Armenians committed genocide in Khojaly,” he added.

Underlining that the parliaments of 15 countries and 16 state assemblies in the US recognized the genocide, he called on all parliaments to do the same.

“The ‘modern’ world of the 21st century is still silent and ignoring the Khojaly massacre,” he said, adding Armenia violated its obligation to prevent genocide and the actions of its perpetrators since it had effective control over those who carried out the actions in Khojaly.

“As the World Azerbaijani Congress, we consider what was done in Khojaly a violation of many conventions such as the 1949 Geneva Conventions, the UN Convention on the Prevention and Punishment of the Crime of Genocide,” it said, demanding that the perpetrators be punished.

It said the failure to ensure that those responsible for the Khojaly genocide are held accountable before the law will pave the way for new genocides that may be committed by Armenians in the future.

The two-hour Armenian offensive on Khojaly killed 613 Azerbaijani citizens – including 106 women, 63 children and 70 elderly people – and seriously injured 487 others, according to Azerbaijani figures.

Baku liberated several strategic cities and nearly 300 of its settlements and villages from the Armenian occupation during this time.