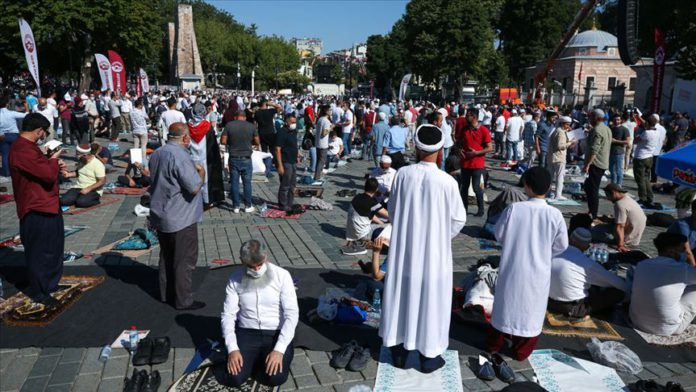 People of all walks of life attended Friday prayers at Istanbul’s iconic Hagia Sophia Mosque as it reopened for worship after 86 years.

Men, women, the elderly and children were seen waiting at the 11 checkpoints in place. Police searched worshippers, while health workers checked their temperature and masks in line with COVID-19 measures.

To save time, some people performed their ablution in the surrounding mosques. Many were seen carrying Turkish flags and prayers mats.

A shuttle service was launched to carry foreigners and others from a designated parking space in Yenikapi district.

Ali Kemal Evlioglu told Anadolu Agency that he came to Istanbul hitchhiking from the Black Sea Samsun province and said he is happy to be able to perform the first prayer in Hagia Sophia Mosque.

“We turned the sad years of waiting into happiness. This is the reason why we are happy,” Evlioglu said.

Another citizen Faysal Karakus said he came from the eastern Elazig province, adding: “It is worth the 86-year wait. Thank God, we could see such a day. We are so happy.”

Kadir Ozver, an Istanbulite, said even though he left his home early morning, it was difficult to reach the mosque due to the crowd.

Adem Cinar said this was a dream come true and he will offer prayers carrying the Turkish flag.

Radio host Mehmet Bozdag said he came from the Aegean Izmir province with his friends to Istanbul.

“Hagia Sophia is entrusted to us by Ottoman Sultan Mehmet II, the conqueror of Istanbul. The symbol of the conquest is key to Istanbul being Istanbul,” Bozdag added.

Ikbal Cetin, a citizen living in Germany, came to Turkey with his two children to perform the first prayer in the mosque.

“We have visited Hagia Sophia before. We were disappointed that it was not open to worship, but we were happy now.”

Hagia Sophia is among Turkey’s top tourism destinations for domestic and foreign visitors.

A Turkish court annulled a 1934 Cabinet decree on July 10 that turned Hagia Sophia into a museum, paving the way for its use as a mosque.

The architectural treasure will also be open to visitors free of charge.