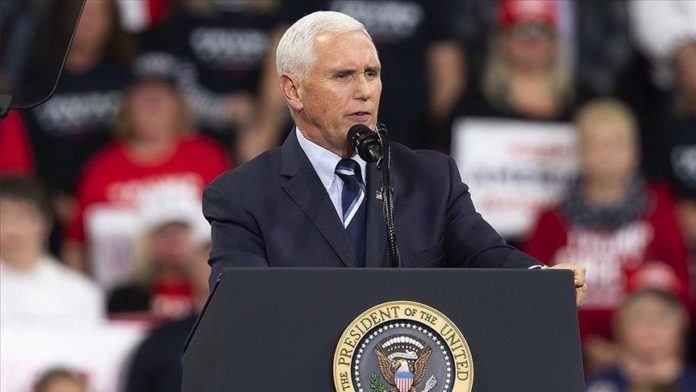 Republicans did not delay the start of the third day of their convention, even amid the threat of a hurricane strengthening to Category 5, protests for racial justice in Wisconsin and a major global pandemic.

Unlike the Democrats, who nominated Joe Biden as their presidential candidate at a virtual convention last week, Republicans have held some of their speeches in person, including an address by Vice President Mike Pence, whose opening remarks were dedicated to people who are suffering from Hurricane Laura.

After accepting the nomination to run and serve as vice president, Pence offered his condolences to the families who have lost loved ones to the coronavirus and vowed that a safe and effective vaccine will be ready by the end of the year to end the pandemic, which has already killed nearly 180,000 Americans.

He then addressed the racial justice protests that have rocked US cities over the past few months and slammed Biden for planning to “defund the police,” a point Biden has repeatedly denied.

“Joe Biden says America is systemically racist and that law enforcement in America has a quote ‘implicit bias’ against minorities,” he said as protests continued in Kenosha, Wisconsin, where demonstrators have taken to the streets against the shooting of Jacob Blake, a Black man who was shot in the back seven times by a white police officer over the weekend.

“Let me be clear: the violence must stop – whether in Minnesota, Portland or Kenosha,” he added.

“The hard truth is…you won’t be safe in Joe Biden’s America,” he continued. “Under President Trump, we will stand with those who stand on the Thin Blue Line, and we’re not going to defund the police–not now, not ever.”

Speakers on the third night of the convention made an effort to paint President Donald Trump as a caring leader who has helped advance women and Black Americans. Vice President Pence made a point of emphasizing Trump’s empathetic character.

“Over the past four years, I’ve worked closely with our President. I’ve seen him when the cameras are off. Americans see President Trump in lots of different ways, but there’s no doubt how President Trump sees America. He sees America for what it is…a nation that has done more good in this world than any other…a nation that deserves far more gratitude than grievance…and if you want a president who falls silent when our heritage is demeaned or insulted…then he’s not your man,” Pence said.

White House Press Secretary Kayleigh McEnany shared her personal story of having had a prophylactic double mastectomy after learning that she carried a gene associated with breast cancer. She described various calls she got from the president checking on her after the surgery, testifying to Trump’s capacity for empathy.

“Choosing to have a preventative mastectomy was the hardest decision I have made. But supporting President Trump, who will protect my daughter and our children’s future, was the easiest,” she said.

Trump advisor Kellyanne Conway, who is stepping down at the end of the month, also spoke, followed by Trump’s daughter-in-law Lara Trump.

Clarence Henderson, a civil rights activist from the 1960s, and Burgess Owens, a former NFL player, were the two Black speakers who pushed Trump’s law and order message.

The convention will culminate with President Trump’s formal acceptance of the party’s nomination on Thursday night.

Turkey ‘important’ for US: ex-congressman