TurkishPress
Home Americas US & Canada Pelosi: Trump should be 'healer-in-chief' amid unrest 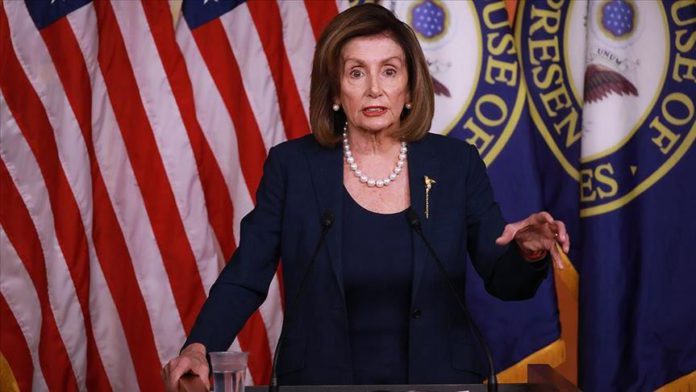 Speaking at a press briefing in Capitol Hill, Pelosi said Trump “has the responsibility to heal” as the nation grapples with eight days of protests regarding the death of George Floyd.

“We would hope that the President of the United States would follow the lead of so many presidents before him to be a healer-in-chief and not a fanner of the flame,” she added.

After a White House press conference, Trump made a surprise visit to historic St. John’s Church on Monday by waking to the church after police used tear gas and flash bangs to clear a way of protesters for Trump.

That was after the president sparked outrage after threatening to use the military to crack down on protests if governors fail to contain protest violence.

Pelosi knocked the response to the protestors, saying: “What is that? That has no place. And it’s time for us to do away with that.”

Then she held a black-covered Bible, read: “A time to heal, the book of Ecclesiastes.”

Floyd, 46, died May 25 in Minneapolis, Minnesota after white police officer Derek Chauvin, knelt on his neck for nearly nine minutes.

His last words. “I can’t breathe,” became a slogan for nationwide demonstrations.

The death has triggered violent protests across the US.

More than 1M get COVID vaccine in US: CDC