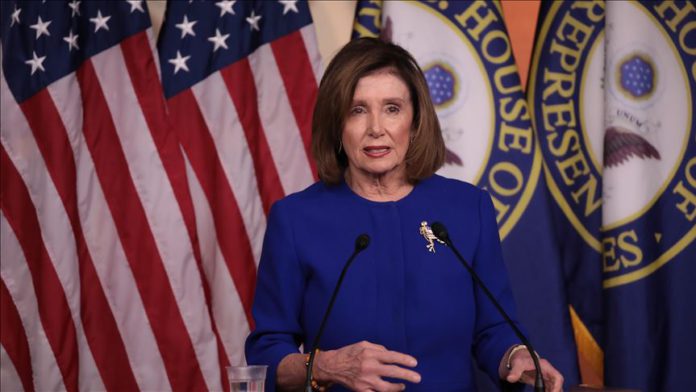 House Speaker Nancy Pelosi called Wednesday for all 11 statues that honor Confederate leaders and soldiers to be removed from the US Capitol as monuments continue to come down in the wake of the death of George Floyd.

Video footage of Floyd’s fatal arrest taken by a bystander has prompted mass demonstrations in major cities nationwide against racial injustice and police brutality. In the recording, Floyd is seen pinned to the ground, his neck compressed by a white Minneapolis, Minnesota police officer’s knee.

The officer ignores Floyd’s pleas that he cannot breathe, maintaining the position even after he appears to lose consciousness.

Pelosi made the request to remove the Confederate statues in a letter to the leadership of the committee tasked by law with managing the Capitol’s National Statuary Collection located in a hall and dedicated to honoring prominent Americans.

“As I have said before, the halls of Congress are the very heart of our democracy,” she wrote.

“The statues in the Capitol should embody our highest ideals as Americans, expressing who we are and who we aspire to be as a nation. Monuments to men who advocated cruelty and barbarism to achieve such a plainly racist end are a grotesque affront to these ideals. Their statues pay homage to hate, not heritage. They must be removed,” she added.

The House speaker previously attempted to have the statues removed in 2017, but the effort failed to bear fruit.

Pelosi’s most recent attempt comes as successive Confederate monuments have been taken down through official directives and protester actions in the wake of Floyd’s May 25 death.

The Confederacy, a group of southern states, seceded from the US to maintain the legal right to own black people as slaves, sparking the deadliest war in American history.

Traditional estimates place the number of Americans who died during the 1860s Civil War at about 620,000, but some studies have suggested the true toll could be as high as 750,000.

Trump earlier Wednesday insisted that no military bases whose names currently honor Confederate military leaders be changed after the Army indicated Monday that Defense Secretary Mark Esper and Army Secretary Ryan McCarthy were open to a discussion about the idea as the US continues to grapple with racial injustice.

The development, which is a change of course from statements made earlier this year, was first reported by Politico.

Proponents of changing the base names note they glorify a group that committed treason against the US and exacerbate racial tensions because of the cause for which the individuals fought.

But Trump said “these Monumental and very Powerful Bases have become part of a Great American Heritage, and a history of Winning, Victory, and Freedom.”

Pelosi: Trump should be 'healer-in-chief' amid unrest