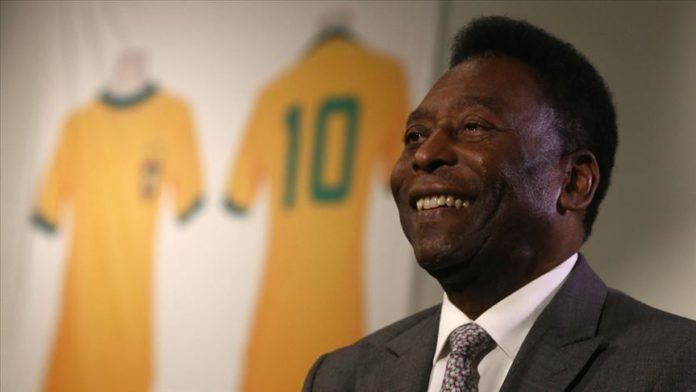 Despite the fact that they were always located on opposite sidewalks, Pele and Diego Maradona, two of the best footballers of all time, have something in common, which goes far beyond their achievements and sports talent.

More than once they were left for dead due to multiple admissions to clinics for different health problems. However, the Argentine star, who will turn 60 on Oct. 30, remains active as coach of the Gimnasia y Esgrima de La Plata club.

For his part, the Brazilian, the only player in history to have won three World Cups with his team (1958, 1962, and 1970), receives his 80 years isolated on Friday, in his Guaruja mansion, on the Sao Paulo coast, protected from the coronavirus pandemic, not only because of his age but also because he had a kidney removed while he was still a professional.

“It is not that I have hidden the information, but playing in Santos I received a push with a knee that fractured my twelfth vertebra, and when I was in the United States, they had to remove the kidney,” he confessed in 2014, almost 40 years after the episode.

Despite the care, Edson Arantes do Nascimento, or Pele, lives connected to the world and does not think of “retiring” from his hectic routine. For this, the King of Soccer uses all available technological resources, where he continues to do what he always did, record advertisements.

His validity is surprising because 43 years have passed since he retired from football. However, Pele, born in Tres Coracoes, inland of Minas Gerais (where there are a museum and a statue in his honor), has an advertising contract with more than a dozen brands from Brazil and around the world.

“I’m fine, I’m just not going to be able to play this week,” joked the idol in a video call meeting he had in early October with Rogerio Caboclo, president of the Brazilian Football Confederation (CBF).

Getting away from the fields did not mean immersing himself in anonymity for Pele, who from his beginnings in the first division of Santos Futbol Club, in 1956 and at the age of 16, was like a magnet for photographers, fans and millionaire contracts in any corner of the world.

Since his retirement in 1977, playing in the New York Cosmos in the United States, El Rey has not stopped associating with brands, charities, and all kinds of events, especially those related to soccer. It took almost three decades of getting off one plane and getting on another, as part of a schedule full of commitments.

“The times he tried to come to the cafeteria where we got together with a group of old friends, it all ended in a chaotic way, with crowds asking for photos or autographs,” says Mengalvio Pedro Figueiro, who will turn 81 in December and shared with El Rey at Santos legendary team, the Brazilian, continental and world multi-champion.

Although he will never be able to avoid the looks and requests of those who recognize him wherever he goes, Pele completes 80 years wanting to be a little more Edson. That is, get on fewer planes, reduce his list of commitments and enjoy his large family more.

“From what we’ve been talking about lately, he’s looking forward to spending more time with all of us, his children, and his grandchildren. I think that’s what he needs right now,” says Edinho, one of his sons, who is 50 years old today and was the protagonist of one of the worst troubles in his father’s life, when he was sentenced to 33 years in prison for laundering of money and drug trafficking in 2005, a penalty that since 2019 he pays in freedom.

Edinho’s full name is Edson Cholbi Nascimento, and he also became a professional footballer, as a goalkeeper for Santos, where he always carried the stigma of bearing the name of his father, “the best athlete of the 20th century,” according to FIFA.

Edinho is the son of Pele’s first marriage with Rosemeire Cholby, in 1966; Kelly Cristina, 53, and Jennifer, 42, were born from the same relationship. In 1994, the star remarried; this time, with the gospel singer Assiria Lemos, with whom he had twins Joshua and Celeste, 24 years old. In addition, the ex-soccer player recognized two extramarital daughters; Flavia Christina, 52, and Sandra Regina, who passed away in 2006.

In 2016, at the age of 75, Pele got married for the third time. The businesswoman Marcia Cibele Aoki is her current partner, with whom he shares the days of confinement.

In order to communicate with the rest of the family and implement his plan to be “more Edson than Pele,” the ex-footballer had to ally himself with technology, which he dominated a little less before the pandemic. Through his cell phone, which he calls “wireless bug,” he talks to his children every day, a rare practice long ago, when his schedule barely left him short pauses. The quarantine also helped those close to him to think about a better strategy for the future of the now octogenarian Pele.

“Our main focus now is social media. We had programmed shows to celebrate his 80 years, but at the beginning of the year, we already realized that we could not do it and we thought of new alternatives. But we made a decision and directed our strategy to the virtual world because Pele needs to be honored and celebrated on his birthday,” says Joe Fraga, his representative, one of the few people who have direct access to the star’s private life. The American businessman even contacted Diego Armando Maradona’s agents to ask the Argentine to dedicate a message to his partner on his birthday.

“From time to time we advise him with some technology, but he already knows how to use almost everything perfectly. He learned fast,” says Edinho.

That familiarity that Pele achieved with social networks and other multimedia tools kept his advertising shares intact: a famous luxury watch brand and a company that develops video games, which enabled the arrival of El Rey to the latest version of the game, sharing a cast with current soccer stars, which will allow the Brazilian a greater remembrance among the younger fans who, from now on, will be able to use, albeit virtually, the infinite skills of a sports legend.

During the last week, Pele’s social networks were more active than ever, with a series of posts that pay tribute to each of the phases of the most important soccer player in the history of Brazil, the country that holds the fifth world championship (half with Pele in the national team).

According to data provided by Fraga, during the first 36 hours of content scheduled for the birthday, his social networks registered more than 9,000,000 impressions (number of times the publications appear for users) and more than 6,000,000 likes.

In addition to virtual tributes, more than a hundred Brazilian cities prepare celebrations with musical concerts and even inaugurations of statues or plaques to commemorate the 80th anniversary of one of the country’s symbols. To name a few, Santos, his usual club, dedicates a week of tributes to him, playing films starring the star (he participated in several during and after his professional career).

On the other hand, the Soccer Museum in Sao Paulo reopened with an interactive exhibition that reviews the eight decades of the star. On the walls of the Tourist Activities Center in Santos, his adopted city, Kobra, a renowned Brazilian artist famous for his murals, exhibits his new work entitled “Corazón Santista” in honor of Pele’s anniversary.

If it hadn’t been for the pandemic, Pele would have been part of some of these celebrations. However, it’s unknown in which health condition he would do because, since 2012, the ex-footballer has been losing muscle mass and usually walks with a limp due to a not entirely successful surgery on his hip. The King has appeared in different events using crutches, canes, and, in his worst days, a wheelchair, as happened in the draw for the World Cup in Russia in 2018.

“I’m fine. I have better days and worse days, but that’s normal at my age,” he said earlier this year, denying a statement from his son Edinho, who slipped that his father had entered in depression. “I continue to accept my physical limitations in the best possible way, but I intend to continue active, with the ball rolling,” he added.

In March, Pele suffered the death of his younger brother, Jair Arantes do Nascimento, known as Zoca, with whom he used to watch football on television, which left the idol “a little broke,” according to his close friends.

But despite these days of peace, his intentions to enjoy the family even more and the birthday that everyone talks about, El Rey, through his representatives, is already in negotiations to be invited by the organization of the World Cup Football in 2022 in Qatar, to which he promises to go as a “tourist and spectator” without official commitments.

However, “he may want to be a normal spectator, but we know that that will never happen because he will always be the center of attention and everyone will want to talk to him. Without a pandemic and with a vaccine, our plan is for him to travel to Qatar, but he will have to accept that he will not be one more watching a World Cup soccer match,” Fraga explains.

Far from coming up with any comparison between Pele and Maradona, or Pele and the current world football cracks, Cristiano Ronaldo and Lionel Messi, the King and his relatives only think about getting closer to young people. Even the best Brazilian player today, Neymar, could reach Pele’s record for goals in the national team (he is 13 away from achieving it).

“It is a good opportunity to connect them both, Pele and Neymar,” says Fraga, anticipating his future plans.

“At his best, Pele had all the technical, physical, and emotional qualities to be a super forward. For this reason, for me he was the best,” says Eduardo Goncalves de Andrade, better known as Tostao, who shone alongside Pele in the Brazilian team that won the World Cup in Mexico in 1970, in a team considered by many specialists as “The best in history”.

US sprinter gets 18-month ban for missing dope tests