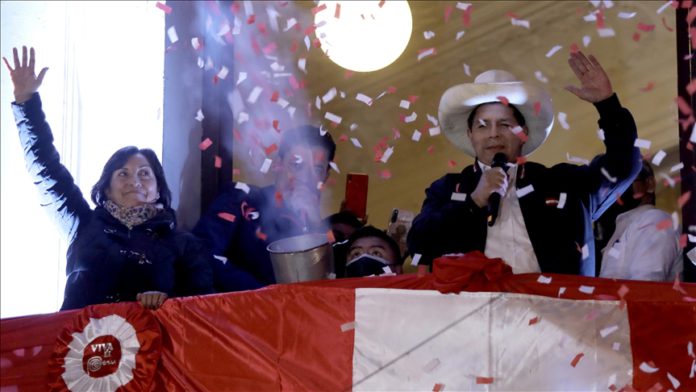 Pedro Castillo took office as president in Peru on Wednesday after that nation was in suspense for more than one month awaiting election results.

The 51-year-old farmer and union leader from the Peruvian highlands, who has been portrayed as a leftist and a conservative, took the reins of the country amid the coronavirus pandemic, deep economic crisis and a history of political upheaval.

“I swear by God, by my family, by the peasants, by the native peoples … fishermen, professionals, children, youth, that I will exercise the office of president in the 2021-2026 period. I swear for the people of Peru, for a country without corruption,” he said in his inaugural address.

Castillo comes to power with the support of the rural poor but has no experience in national politics.

Three days of ceremonies are planned for the swearing-in of Castillo, who assumes power on the day Peru commemorates its bicentennial independence.

His name became relevant in 2017 during a teacher strike regarding pay.

He was the winner in the first round of elections among 18 candidates.

The leftist teacher maintained a razor-thin edge against Fujimori since the second-round election on June 6.

Castillo had an advantage of about 44,000 votes against the daughter of former President Alberto Fujimori.

Although Fujimori claimed fraud regarding 500,000 votes, international observers did not report irregularities.

Peru has been immersed in political turmoil with four presidents in the last five years.

Last year, Congress pushed an impeachment process against former President Martin Vizcarra, which forced him to step down.

The nation has also been hard hit by the coronavirus pandemic.

Two million people have lost their jobs and nearly one-third now live in poverty, according to official figures.

The country has the world’s highest per capita death rate from the virus. It reports nearly 196,000 deaths and more than 2 million infections, according to Johns Hopkins University.

Pakistan says not responsible for Taliban actions in Afghanistan