TurkishPress
Home News Peace push for Libya to be model for world: Turkey 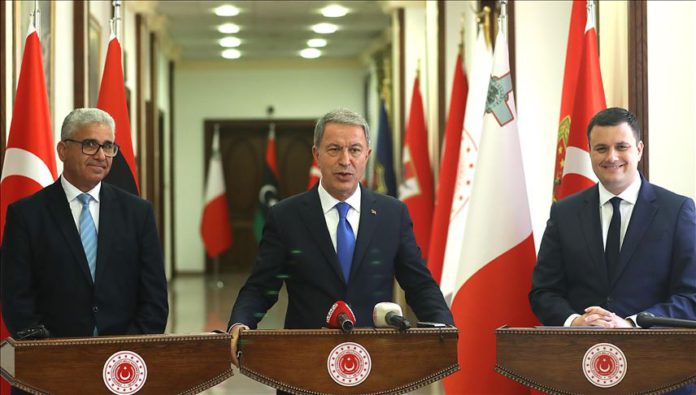 Turkey’s defense minister on Monday said his meetings with top Maltese and Libyan officials had been fruitful, adding that their efforts to ensure peace and stability in the Mediterranean region would set an example for the whole world.

The trio discussed regional developments and bilateral issues, and all sides had a “sincere” exchange of views, said Akar.

“We held a highly positive, productive and constructive meeting,” Akar said, including such issues as the fight against trafficking, irregular migration, regional security, and peace.

Akar went on to say that the countries’ collaboration would significantly promote regional stability, help practice upcoming measures more effectively, and lead to important gains for both countries and the region.

Libya and the Mediterranean island of Malta are separated by only about 357 kilometers (222 miles).

Emphasizing that all participants at the meeting were on the same page on many important issues, both in two- and three-way meetings, Akar said: “I see that we agreed to continue the coordination between our countries in the coming days for the sake of regional peace and tranquility.”

Turkey stands by its Libyan brothers

Stating that Turkey’s responsibilities in the international arena have gradually grown, he went on to say that Turkish contributions to stability and security have begun to bear fruit.

Turkish activities in Libya were carried out as part of its agreements last November with the UN-recognized Libyan administration based in the capital Tripoli, also known as the Government of National Accord (GNA).

“Our military training, cooperation, and consultancy activities continue [in Libya],” he said, adding that Turkey’s approach to the war-torn country is based on the principle of “Libya belongs to the Libyans.”

“I want everyone to know that we always stand by our Libyan brothers. Our goal is that Libya lives in peace, tranquility, and security,” said Akar.

“We do know that the biggest obstacle to this goal is the putschist [Khalifa] Haftar,” he said, urging the immediate halt to all aid and support for the warlord.

Underlining that Turkey has deep historical ties with both Malta and Libya, Akar thanked Malta for their “determined and constructive” approach towards finding a political solution for Libya’s woes.

Efforts for a long-term political settlement, however, have so far failed due to an ongoing military offensive by warlord Khalifa Haftar.

In recent months, the Libyan Army has made significant gains against Haftar.