TurkishPress
Home News Peace can only be achieved by ending occupation: Aliyev 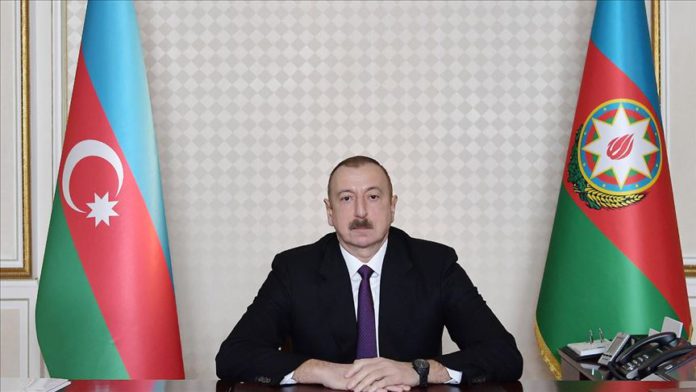 Azerbaijani President Ilham Aliyev said Thursday that the only way to achieve sustainable international peace and security is to put an end to occupation.

Touching on the disputed region of Nagorno-Karabakh, Aliyev said that 20% of Azerbaijani territory has remained under Armenian occupation for nearly 30 years.

“Armenia used military force against Azerbaijan in brutal violation of the UN Charter and occupied Nagorno-Karabakh and seven other regions of Azerbaijan. More than one million Azerbaijanis became refugees and internally displaced persons.

He also said that Armenia created “the criminal, terrorist puppet regime in these territories to hide its responsibility” for occupation of Azerbaijani lands.

Aliyev also called for international sanctions against Armenia as an aggressor state.

“The purpose of this provocation by Armenia was to create a new source of tension in the region, set aside the issue of Armenia’s occupation of Azerbaijan’s territories, involve third parties in the conflict, and damage Azerbaijan’s strategic infrastructure projects,” he stated.

Armenia also attempted to distract its people’s attention from the country’s growing socioeconomic problems, he added.

He stressed that “the armed forces of Armenia must withdraw from all occupied territories of Azerbaijan. The entire world recognizes Nagorno-Karabakh as an integral part of Azerbaijan.”

Example of tolerance and coexistence

Aliyev said that “multiculturalism is the way of life for the people of Azerbaijan. We present to the world the example of tolerance and coexistence.”

He said the “Baku Process” launched by Azerbaijan in 2008 to strengthen dialogue and cooperation between the Muslim world and Europe is supported by the United Nations.

Touching on Azerbaijan’s active role in the region, Aliyev said it has actively participated in regional connectivity projects such as the East-West, North-South and North-West transportation corridors, becoming one of Eurasia’s primary and reliable transport and logistics hubs.

“We have also commissioned the Baku-Tbilisi-Kars Railroad and the Baku International Trade Seaport with the potential of handling capacity of 25 million tons. Azerbaijan is [also] a member of the international space club. Today, we have three satellites – two for telecommunications and one earth observation satellite. Eighty percent of our population uses the internet.”

Regarding the coronavirus pandemic, Aliyev noted that Azerbaijan has taken timely and necessary preventive measures to stop the spread of the virus.

“The healthcare infrastructure in Azerbaijan has been developed and renovated significantly, with almost 700 hospitals and healthcare facilities built or completely renovated in the past 17 years,” he added.

He also called for solidarity to tackle the coronavirus and proposed reforms for the post-pandemic period to increase the UN’s role and prestige.

“Refugees and IDPs [Internally Displaced Persons] have become the most vulnerable group of the pandemic period. The return of these vulnerable groups to their native lands in safety and dignity gains great urgency,” he said.

Ensuring affordability and fair distribution of a vaccine is necessary, while the least developed countries should get it free of charge, Aliyev said, adding in this regard, additional oversight mechanisms should be developed.

“The scope of the pandemic’s negative impact on implementing the Sustainable Development Goals by the countries must be carefully analyzed, and solutions must be formulated,” he added.