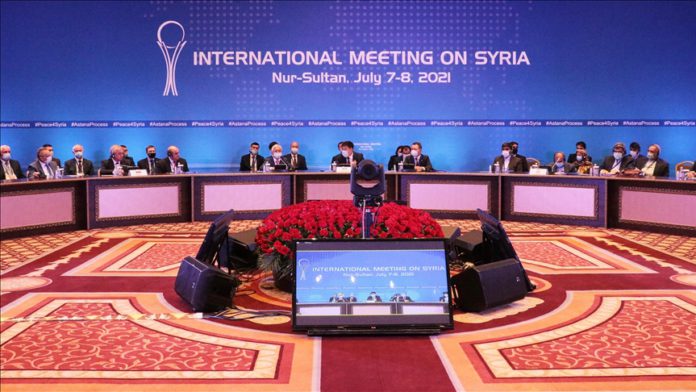 The main session of the 16th round of Astana talks on Syria was held in Kazakhstan on Thursday with the attendance of representatives of the regime and opposition forces.

The talks, which were initiated on Wednesday with bilateral and trilateral meetings of the guarantor countries — Turkey, Russia and Iran — in the Kazakh capital Nur-Sultan, continued for a second day between all parties.

Among the topics of discussion were the current situation on the ground in Syria, delivery of humanitarian aid, and the resumption of the work of the Syrian Constitutional Committee in Geneva, meetings of which began in October 2019 with 150 members and are the first concrete step to draft a new constitution to determine Syria’s future.

The parties also talked about confidence-building measures such as the exchange of prisoners, the release of hostages and the search for missing persons.

Also taking part in the meetings, which are being attended by UN special envoy for Syria Geir Pedersen, are Iraq, Lebanon and Jordan — the neighboring countries of Syria — with observer status.

Following Wednesday’s meetings, Pedersen told reporters that it is important to ensure stable talks between the relevant parties for the resumption of the committee’s work.

The 16th meeting of the Astana peace process had been postponed due to the COVID-19 pandemic.

Syria has been ravaged by a civil war since early 2011, when the Bashar al-Assad regime cracked down on pro-democracy protesters with unexpected ferocity.

The Astana peace process to end the conflict was launched in January 2017 at the initiative of Turkey, Russia and Iran.

Meetings of Astana guarantors also contribute to the advancement of the UN-led diplomatic process in Geneva.

*Writing by Sena Guler and Beyza Binnur Donmez in Ankara