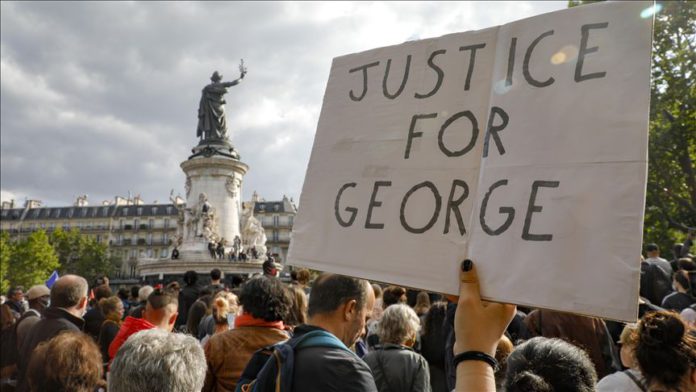 A rally in Paris on Tuesday against police brutality and racism evoked jarring shows of support for similar protestors after the death of an unarmed black man in police custody in the US.

Headed by anti-discrimination group SOS Racisme, the demonstrators held up signs and chanted slogans against racism towards minorities and marginalized ethnic groups in France as well.

Unarmed US black man George Floyd had died after being detained by police in Minneapolis, Minnesota. One officer, Derek Chauvain, knelt on Floyd’s neck for nearly nine minutes, leading to his asphyxiation and subsequent death.

The incident sparked outrage in Minneapolis, as well as hundreds of other cities around the US and the world.

In one of the most stirring moments of the rally, protestors in Place de la Republique fell silent for eight minutes and 46 seconds — the time that Chauvin kept his knee on Floyd’s neck — at the exact moment that Floyd was laid to rest in his home state of Texas.

Dominique Sopo, the president of SOS Racisme, on Sunday had called for the protest to take place during a television interview.

The few thousand protesters gathered peacefully, most wearing masks and many carrying signs with messages including “Black lives matter,” “White silence = violence,” and “Racism is not over But I’m Over It.”

The crowd applauded as speakers, including activist and journalist Audrey Pulvar, took the stage.

“Everyone thinks of France — especially Paris — as a very white place. We see many faces here, and there is great diversity. The racism as we know it must stop. Police brutality must stop,” said Pulvar.

Other well-known political figures were also in attendance, such as Jean-Luc Melanchon of the La France Insoumise party, Fabien Roussel of the French Communist Party, and Yannick Jadot of Europe Ecologie Les-Verts.

On Sunday, Sopo had asked that President Emmanuel Macron and Prime Minister Edouard Philippe demonstrate their solidarity with the group’s mission.

“The Prime Minister and the Head of State must speak out and must tell us how they intend to solve these problems in the police, and that we stop having an interior minister who explains to us almost every day that there is no problem,” he said.

Demonstrators came out in large numbers in other cities throughout France as well. The protests also coincided with a report commissioned by the family of Adama Traore, a French man who died in police custody in 2016 after being pinned down by three police officers.

In a press conference on Monday, Interior Minister Christophe Castaner said the government would institute a ban on the chokehold while carrying out arrests.

“The chokehold method will be abandoned. It will no longer be taught in police and gendarmerie schools,” he said.