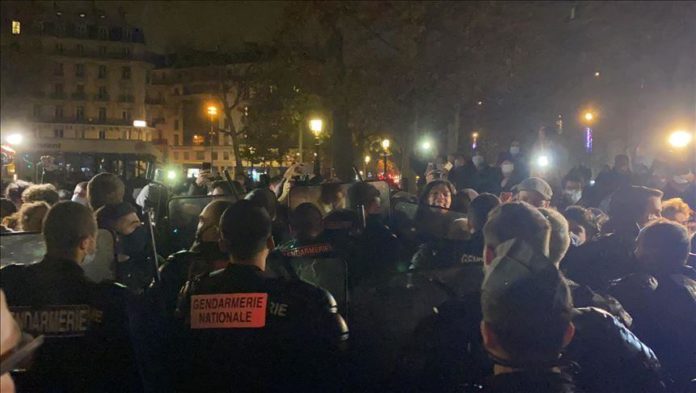 Paris police cleared a migrant camp Monday night set up on the Place de la Republique in the center of the capital, according to reporting by franceinfo.

Several hundred tents were lifted right off the pavement — some with people still in them — as law enforcement sought to evacuate some 500 people who had set up just an hour before, it added.

As the crowd dispersed, police used teargas and dispersing grenades to move the migrants from the area.

The Place de la Republique is a large square located on the border between the 3rd, 10th, and 11th arrondissements in Paris.

The move by the police comes just one week after their dismantling of a camp in Seine-Saint-Denis north of Paris where more than 2,500 migrants were told to evacuate. Despite busses on site that day set to relocate people to hotels and centers in the area, it is reported that the migrants cleared from the Place de la Republique hail from the Seine-Saint-Denis camp, having wandered the streets over the past week.

The prefecture of the Ile-de-France — who manages the operating of shelters in the region — along with the Paris Prefecture of Police issued a joint statement, saying: “The constitution of such camps, organized by certain associations, is not acceptable. The prefecture of police therefore proceeded immediately to the dispersal of this illicit occupation of public space.”

Kerill Theurillat, a coordinator for the humanitarian organization Utopia 56 that had helped set up the camp, described the police action as “sudden and aggressive” in an interview with BFMTV.

“It was a very violent dispersion,” he said. “We saw incredible scenes, of the police officers which raised tents with people inside and literally throwing them out.”

Despite working hand-in-hand with law enforcement in all areas, especially those dealing with migrants, Interior Minister Gerard Darmanin said Tuesday he found some of the images he had seen of the operation “shocking” and has demanded written explanation from the prefecture by the middle of the day Tuesday.

“I have just requested a detailed report on the reality of the facts from the Prefect of Police by midday tomorrow,” the minister said on Twitter. “I will make decisions upon receipt.”

Utopia 56 however decried Darmanin’s words, saying in a tweet they were “the hypocrisy of a man in the face of his contradictions. A violent expulsion in Saint-Denis and a permanent persecution of exiled people. Once again we await your actions.”