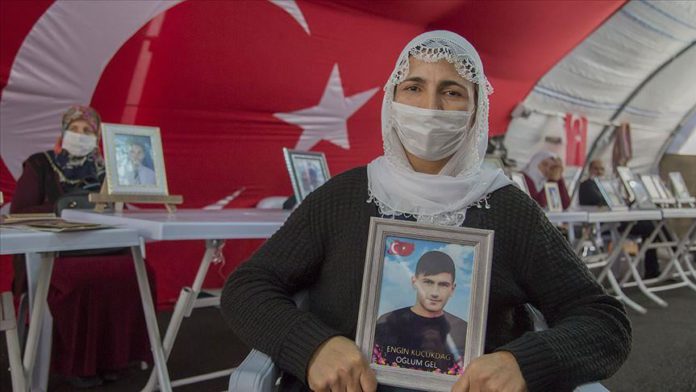 Months have passed since families of those abducted by the YPG/PKK terror group started to stage sit-in protest in southeastern Diyarbakir province, yet the weeping families are determined to maintain their protest until their children are back.

The protesters, camped outside the offices of the opposition People’s Democratic Party (HDP), are demanding that their children kidnapped by the YPG/PKK terrorists be returned.

Kamile Kucukdag, a mother whose son was kidnapped by the terror group in 2015 at the age of 15, urged HDP to ensure the return of his child and said she would continue her protest for “centuries” if necessary.

“We are not leaving anywhere, we would sacrifice our lives for our children,” she said, and called on his son to surrender to the security forces.

Abdullah Demir, a father, said he is also determined to continue the sit-in protest until his abducted son is back.

Demir said HDP lawmakers would use the backdoor of the office and criticized the party stance in the context of YPG/PKK abduction of children.

“Politics is not about deceiving children and taking them to mountains,” said the weeping father, accusing the party of having no conscience or compassion at all.

God willing, we will come together with our children; we are not leaving here even if it takes 20 years, he said.

In its more than 30-year terror campaign against Turkey, the PKK — listed as a terrorist organization by Turkey, the U.S., and EU — has been responsible for the deaths of 40,000 people, including women, children, and infants. The YPG is the PKK’s Syrian offshoot.