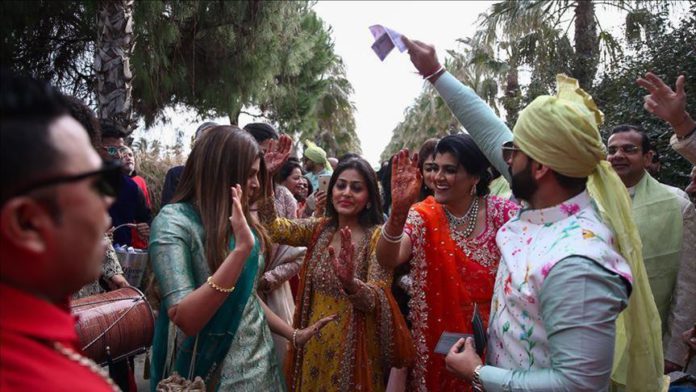 The preparations had begun early this year for 31-year-old Aditya Chouhan, a resident of India’s capital, New Delhi: A long guest list, multiple functions and a post-marriage trip in May.

In March, however, India imposed a pandemic lockdown, bringing everything to a grinding halt. It also started worrying Chouhan’s family. With no option in sight, the family decided to cancel the marriage ceremony.

“Things were beyond anyone’s control. It was the first marriage of our family, so everyone was excited…But when there was a lockdown, we cancelled it,” he told Anadolu Agency.

As the country began emerging from the lockdown, the family decided to perform the marriage ceremony in July, but with a limited number of guests — less than 50. In several Indian states, the number is less.

“It was a very small gathering. Even my friend couldn’t come…After our marriage, we preferred to stay home, only because the situation is pretty bad outside,” he said.

His story is not the only one. India’s fat wedding ceremonies have suffered a major jolt this year due to the pandemic, which is witnessing a massive increase in India.

A report in 2016 estimated India’s wedding market at $50 billion, which has been growing rapidly every year.

But amid the pandemic, people are generally either cancelling such functions or holding them with a very limited number of people.

Rujlan Ahmad, a resident of Jammu and Kashmir, was supposed to get married in the first week of September. Since routine international flights are shut, he decided to cancel the wedding.

“I was not sure if I would be able to come back to Dubai. So we decided to cancel the function till March next year.”

He said the family had planned to invite not less than 500 people.

“Kashmiri weddings are very big. Our wedding list was very long. But we don’t know how things will be in March. We will decide in March only.”

Ajay Saini, who owns a banquet hall in India’s northern state of Haryana, said in normal times, around 500-1,000 people would be present at a function.

“We have been closed since end-March because of COVID-19,” he said.

According to Saini, the cost of the wedding depends on the client.

The government’s move to only allow gatherings of 50 people is not good for them at all, Saini said.

“Our staff members total around 30. How will we manage things when we have permission for [only] 50 people at a marriage ceremony? Most of the functions have been cancelled in the last few months.”

Mohammed Imran, a Delhi-based wedding planner, said there have been huge financial losses due to the pandemic in the business.

“Since the end of March only, I started receiving calls from clients saying they have cancelled the functions. The worst part is that everyone associated with this business, from top to bottom, has suffered,” he said.

Saini said he is not very optimistic about the future.

“I am giving salaries to my staff from my savings. Only god can save us. I see less hope that things will be fine until October next year,” he said, adding the losses to the industry are expected to be in the millions, as large numbers of people are associated with the industry.

While most of the weddings are being held in smaller numbers, there are some instances where weddings have become a source of COVID-19 infection.

In the northern state of Bihar, more than 100 people tested positive after a wedding ceremony became a chain for COVID-19 infection in which the groom died just two days after his marriage.

“There are a few incidents where people got infected at the marriage ceremonies. We [people] should follow the government guidelines in their respective states so that such incidents do not take place again anywhere,” said Dr. Ravindra Khaiwal, faculty member at Community Medicine and School of Public Health at the north India-based Postgraduate Institute of Medical Education and Research.

“We should follow all guidelines and precautions,” he added.