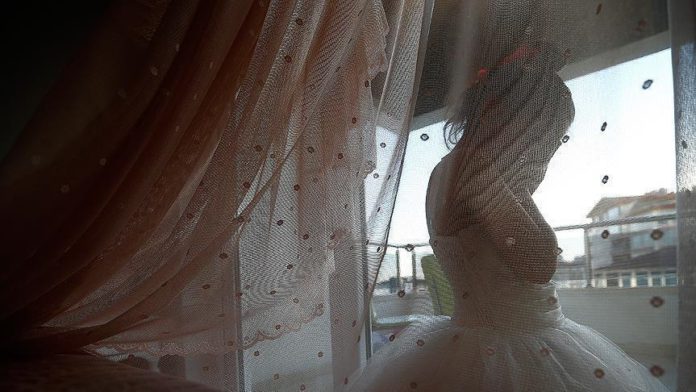 Bangladesh has seen a rising trend in child marriages during the coronavirus pandemic, shattering the dreams of hundreds of young girls who aspire to graduate and be independent.

The country has 38 million child brides and is one of the top 10 countries with the largest percentage of under-age marriages, with a 51% ratio, according to UNICEF.

Marriage before the age of 18 for girls and 21 for boys is prohibited in the country, under the law.

Based on recent surveys, experts are concerned that child marriages may raise school dropout rates once campuses reopen after a 15-month hiatus.

Joly, a teenage girl from the southwestern Satkhira district, aspired to be a university graduate so that she could support her poor family.

Her paralyzed father is unable to work in any capacity. Her mother, meanwhile, has been struggling to make ends meet by working in other people’s houses and farming goats she received from a local NGO.

Joly, who was raped in primary school and is now 16 years old, was forced to marry seven months ago because her family could no longer afford her expenses as the pandemic worsened their economic condition.

Another teen grade 10 student from the northern Gaibandha district, Sufiya Akter, had a similar tale to share. Her parents were forced to marry her off at the age of 15 because they could no longer support her schooling. Her father, a farmer, has been struggling financially during the pandemic.

Their dreams of graduating have now become a pipe dream, as these young women are taking on home responsibilities after marriage, putting their education on pause.

BRAC’s Community Empowerment Program (CEP), the largest global non-governmental organization focusing on the issue reported 189 child marriages between April 2019 and March 2020, compared to 289 in 2021, an alarming increase of 53%.

Another organization, World Vision Bangladesh, witnessed 486 child marriages and prevented 800 more between March 2020 and March 2021 in the 28 districts where they work.

The girls’ names are changed to protect their identities from societal backlash.

Prosanta Kumar Dey, a CEP Regional Manager and the coordinator of the third major Khulna division, told Anadolu Agency, “We have noticed a 7-8 times increase in child marriage in his region, despite preventing at least 96 child marriage attempts this year with the help of local government.”

He attributed the surge to a 15-month school closure, which prompted low-income families to marry off their girl children.

“Meanwhile, low community movement and monitoring from NGOs and government ends have also allowed guardians to evade obstacles and violate the marriage law of the land,” he pointed out.

“Some families have indicated that loss of livelihood causing financial crisis during the pandemic led to a rise in child marriage incidents,” Farah Kabir, Country Director of ActionAid Bangladesh, told the Anadolu Agency.

“The rise in child marriage has also been linked to the schools’ closure for an extended length of time. It will cause many girl children to drop out of school and have a severe impact on their future,” she warned.

According to a report jointly prepared and presented last month by a group of local and international NGOs, 13,886 child marriages have taken place between April and October 2020. According to 41% of respondents, the main reason for child marriages is poverty and the inability to provide basic essentials for family members.

The Education Ministry has recently said the government kept trying to reach most targeted students through regular academic contact to prevent child marriage and possible dropout.

Mohiuddin Ahmed, the Ministry of Women and Children Affairs’ Additional Secretary, strongly objected and questioned the data provided by rights groups and NGOs.

However, the official has admitted that no recent government research or study has been conducted on the country’s current child marriage situation.

“We have a number of projects and official bodies in districts and sub-districts to build awareness and protect child marriage […] we are in a continuous effort to take immediate action to protect the girl child from being married off in early age. And those local government officials take care of the girl children vulnerable to child marriage apart from providing legal support.”

Meanwhile, “we have a target to reduce child marriage to a nominal to meet the SDG goals by 2025 and 2030,” he added, saying that child marriage could happen for a number of reasons, including financial, and the pandemic has a greater impact on the society and personal sphere.