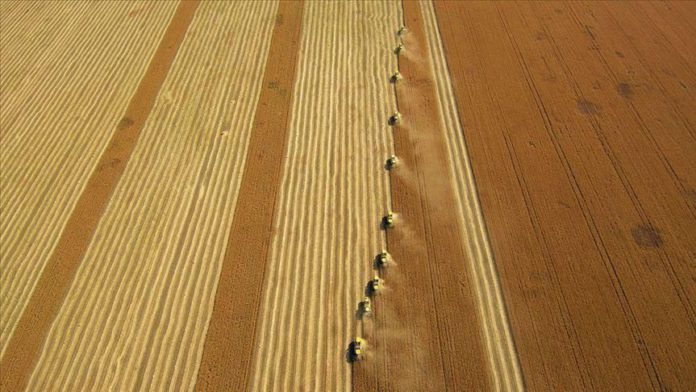 Wheat took on greater strategic importance amid the pandemic, when countries focused on domestic consumption rather than foreign trade, and countries’ wheat stocks rose significantly.

Trade relations and supply chains were affected by the protectionist policies that got stronger during the COVID-19 pandemic, which first appeared last December in China.

While global wheat stocks total around 320 million tons, China holds around the half of these stocks with 163 million tons, up 7 million since the beginning of this year, underlined Ulusoy, also the head of the Turkish Flour Industrialists’ Federation.

While one in three people worldwide lives in China, 50% of the wheat stocks are in China, he said, adding: “The shelf life of wheat is three to five years, and if there’s a war, wheat [as a strategic product] is something like a bullet.”

On flour production and trade during the pandemic, he said countries such as France and the UK focused on domestic consumption in this period.

France, Turkey’s rival in the global flour market, especially in West African countries, was unable to meet flour demand in the pandemic period but Turkey continued to export flour to Africa, he said.

The Turkish flour industry capacity utilization’s rate is around 50%, with total capacity of 32 million tons annually, and 17 million tons of unused flour capacity, which can help meet world flour demand, he underlined.

If any country needs a large amount of flour, it has to come to Turkey, and countries which face problems with industrial production such as Yemen, Libya, Somalia, Iraq, Cuba and Venezuela cannot produce flour domestically, Ulusoy highlighted.

Turkey is the largest flour exporter in the world and second-largest pasta exporter.

Quality and cost edge in pasta

Turning to Turkey’s pasta exports this year, Ulusoy said while the country exported 1.25 million tons of pasta last year, this year the figure is expected to reach over 1.3 million tons.

Turkey’s durum wheat — for pasta production — surpasses world standards while its prices are below global prices, he underlined.

This cost and quality advantages provide opportunities for Turkish pasta producers, he added.

Ulusoy also said the durum wheat cultivation area in Turkey has been growing every year, with durum wheat production expected to reach 3.75 million tons this year, up 500,000 from 2019.

Bread wheat, however, faces problems, and production has been falling, he said.

Turkey’s wheat cultivation areas dropped to 6.7 million hectares from 7.3 million from two years ago, he said.

Ulusoy also stressed that Turkish flour exporters meet 85% of the wheat demand from Russia, which has plans to limit wheat exports in the coming era.

As many Turkish farmers do not want to live in villages, even they earn good money, the country should implement corporate production, he said.

Turkey has been working on contract production for a decade but faced legal hurdles, but some new measures will help with that, he stressed.

The solution is mandatory leasing, under which if a village does not cultivate their lands, they must be rented to a company for mass production, he added.

If Turkey supports private sector agriculture projects, the country will boost its agricultural revenues, past the Netherlands’, he asserted.

“Even if we increase 20 million tons of wheat production to 27 million tons, we still have an industry that can easily use all of them,” he noted.

He said Turkey should focus on the industrial production side to raise exports, mentioning how Turkey’s hazelnut exports are around $3 billion annually but if it sells processed hazelnuts to foreign countries, that figure could grow tenfold to $30 billion.

“Flour is a semi-finished product. Turkey should take one more step and produce frozen goods such as bread and cakes,” he underlined.

On his own flour company, Ulusoy Un, he said the firm is about to complete a new investment to boost its flour production.

He stressed that Ulusoy is one of only a few flour producers in Turkey that can meet large flour demands with strict hygiene and quality rules.

The firm raised its flour production capacity from 900 tons to 2,100 tons daily from the end of the last year, he noted.