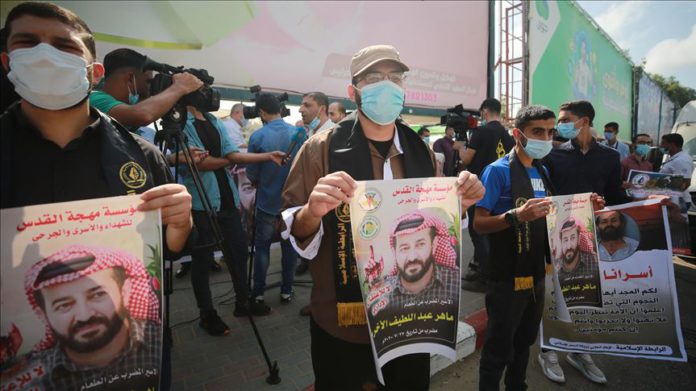 Palestine Palestinians on Saturday called on international human rights groups to urgently put pressure on the Israeli authorities to save the life of Maher al-Akhras, a Palestinian detainee who has been on a hunger strike for 76 days in a row.

The call came in a sit-in organized by the Islamic Jihad Movement in the cities of Gaza and Rafah in solidarity with al-Akhras.

Al-Akhras has waged an open-ended hunger strike to reject the Israeli policy of “administrative detention”.

In a speech during the Gaza pause, Khaled Al-Batsh, the leader of the movement, said: “We warn the occupation [Israel] against harming the life of the detainee al-Akhras and we hold them [Israel] responsible if something unfortunate happens to him.”

Maher al-Akhras was detained on July 27, and held by the Israeli authorities under the administrative detention, with no trial or charges, which pushed him to go on an open-ended hunger strike.

Under Israel’s administrative detention policy, prisoners can be held for up to one year without charge or trial.

Some 5,000 Palestinian political detainees are languishing in Israeli jails, including 43 women, 180 children, and 430 detainees under the administrative detention.