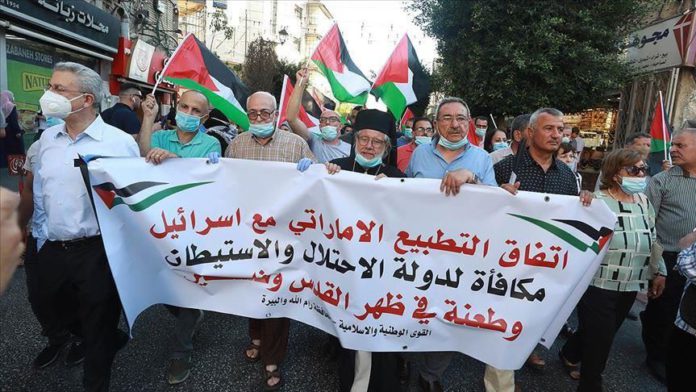 Thousands of Palestinians gathered Saturday to protest a deal between the United Arab Emirates (UAE) and Israel to normalize ties.

Two separate massive protests were held in Cibaliya in the northern Gaza Strip and the southern Rafah crossing after Hamas urged residents to demonstrate.

Hamas spokesperson Ismail Ridwan told Anadolu Agency the agreement will not give legitimacy to Israel.

“Israel will never be the friend of Arabs and Muslims,” according to Ridwan who said the UAE “sold out” Palestinians for their own interests.

“The UAE will be the loser of this agreement, because Israel’s desires will go as far as to pillage the resources of all Arab countries, especially the UAE, beyond the borders of Palestine,” he added.

US President Donald Trump announced Thursday the agreement to normalize relations, in a move forestalling Israel’s controversial plans to annex large swathes of the occupied West Bank. The deal is expected to inked within three weeks.

Palestinian groups denounced the deal, saying it does nothing to serve the Palestinian cause and it ignores the rights of Palestinians.

The peace deal is a “treacherous stab in the back of the Palestinian people,” Hamas said in a statement.