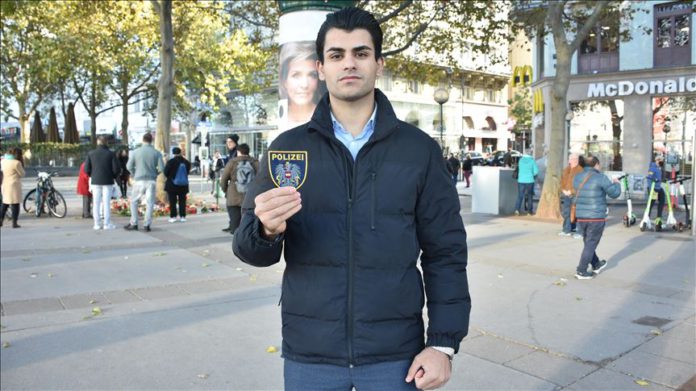 A Palestinian immigrant, who helped a wounded police officer during Monday’s terrorist attack in Vienna, recalled the night of the rampage.

Osama Joda, 23, who moved to Austria eight years ago, told Anadolu Agency as to how he risked his life to help the police officer who was shot by a gunman in Vienna’s city center.

He was working at a fast-food restaurant in Schwedenplatz square when the incident took place.

When he and his friend heard the gunshots, Joda said, they tried to get to a safe place during which the terrorist came very close to them, and therefore he hid behind a tree.

Noting that there was no police officer around when the attacker started shooting, Joda said: “I saw the assailant behind the tree and tried to speak to him in Arabic. I told him that I am a Palestinian and Muslim, but he did not listen to me and continued shooting. He fired at least 20 shots.”

He said that two police officers arrived shortly afterward and the terrorist went into hiding.

The officers were unprepared, Joda said, adding the gunman shot one of them before they could take action.

“The police officer fell to the ground and was seriously bleeding,” he said.

“At that moment, I wanted to help the injured police officer by showing up from behind the tree where I was hiding, but the other officer told me to go to a safe place,” he recalled.

Joda said that he did help the officer anyway by moving him to a close-by bench and gave him first aid.

An ambulance arrived later, but the paramedics were in shock and could not approach the injured police officer, he said, adding that this is when two Turkish young men rushed to the site and took the injured policeman to the ambulance, he added.

The Vienna Police thanked Joda by honoring him with an honorary medal.

“I am a Palestinian Muslim, the two Turks who came to help the police were also Muslims, we are proud of what we did,” he said.

At least four people were killed and 17 more were wounded in the terror attack that shocked Austria.

Austrian Interior Minister Karl Nehammer said the assailant, who was later killed by the police, was a sympathizer of the Daesh/ISIS terror group.

The 20-year-old was known to police as he was arrested last year for attempting to travel to Syria to join the terror group.

He was released from jail in December, due to his young age.

Local media identified him as Kujtim F., who had both North Macedonian and Austrian citizenship.