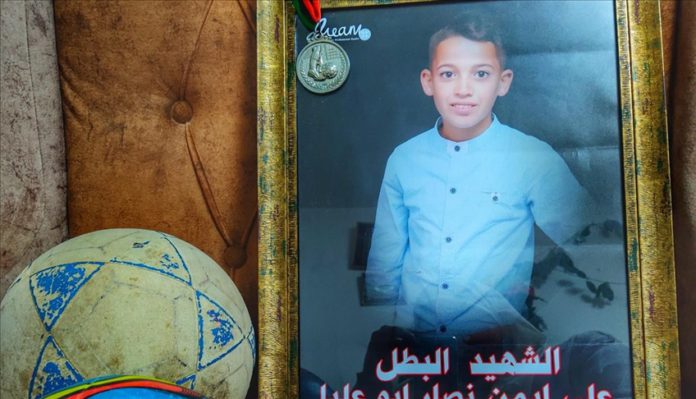 Nihad Abu Ali can’t forget the last words she heard from her son Ali on the eve of his 15th birthday.

“Mom, guess what will happen tomorrow? I will grow up another new year,” Nihad recalled the words as tears rolled down her cheeks.

“He was planning to buy a cake for his birthday, but we have lost him,” the bereaved mother said.

The Palestinian teenager was shot and seriously injured by an Israeli soldier during the weekly anti-settlement demonstrations on Dec. 4 in the village of Al-Mughayir, 27 kilometers northeast of Ramallah.

He was rushed to hospital after failed attempts to stop his internal bleeding, where he was pronounced dead.

“He was very affectionate. He was all the time around me helping, joking and kissing me,” the mother said. “But now, he has gone forever.”

Ayman Abu-Alia, his father, remembers waking up his son on the eve of his death to help his grandfather in grazing the family’s animals.

“I told him that his grandfather needs him,” the father recalled. “He prayed and left for helping his father. I remember his prayers as well.”

Ali used to go with his grandfather to the east of the village where the water wells are located to graze the animals.

“Israeli settlers are controlling our water and land there under the protection of the army,” Abu-Alia said. “They smashed water pipes that we used for irrigation, let alone threatening Ali and his grandfather several times before.”

As he was standing in front of his grandfather’s house, Ali heard the sound of gunfire. He ran to the east of the village to join his brothers and friends in the demonstration.

“I saw him watching the demonstration with his friends,” his brother Bassam, 18, told Anadolu Agency. “He was standing with his hands in his pockets chatting about his birthday when an Israeli soldier shot him.”

Bassam was himself shot several times before during demonstrations, the latest of which was a week before his brother’s death.

Sitting in a room where Ali’s photos are hung everywhere, his father recalled the joy of his dead son when he knew that his sister has given birth to a baby boy.

“He was full of happiness because his sister has given birth to a baby that looked like him” Abu-Alia said.

His sister Aseel couldn’t speak to Anadolu Agency due to her deep grief, only saying that she has named her baby after her brother.

His grandmother Khayriat Abu-Alia is still unable to believe that she has lost her beloved grandson on his birthday.

“He was around us. He was always there whenever we need him,” she said. “Every night, I call on him at night but he no longer answers me. I can’t forget the loss of my beloved grandson.”