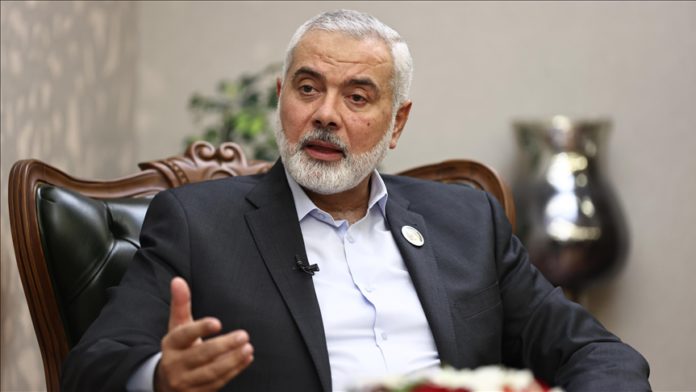 Hamas political chief Ismail Haniyeh has stressed that the Land Day is an affirmation of the Palestinian right to return to their homeland.

In exclusive statements to Anadolu Agency in Istanbul, on the 45th anniversary of the Palestinian Land Day, marked on March 30, Haniyeh said the occasion affirms adherence to “the homeland and the right of return. It is a sacred right that no one can abandon or neglect.”

The Palestinian Land Day is a commemoration of the killing of six Palestinians during protests against an Israeli decision to expropriate about 21,000 dunams of land on March 30, 1976.

“The Land Day is an eternal day in the memory of the Palestinian people. It marks a direct confrontation between the people of the land occupied in 1948 and the Zionist occupation, which was trying to control and settle in a precious part of our occupied Palestinian land,” Haniyeh said.

“During [the confrontation], a number of people were wounded and martyred. The Palestinian people celebrate this memory every year because it carries many symbols, the most important of which is that the land is the core of the conflict between us and this occupation,” he said.

Haniyeh went on to say that the Palestinian people do invaluable and precious sacrifices “in order to protect the land and the homeland and to confront the annexation and settlement plans that the occupation has been trying to implement since it occupied blessed Palestine.”

The Hamas chief considered that “when we talk about this day, it is from the memoir of the people inside occupied Palestine as it is a confirmation that the Palestinian people are united in Gaza, in the West Bank, in Jerusalem, in the 48 territories, and in exile and diaspora.”

“Our adherence to the homeland and the right of return is a sacred right that no one can abandon or neglect. Therefore, I pay special greetings to the people in occupied Palestine in 1948 and I assure them that the battle is one and the destiny is same,” Haniyeh said.

“The Palestinian people will have their political entity, their land and their state on the land of Palestine, God willing,” Haniyeh stressed.