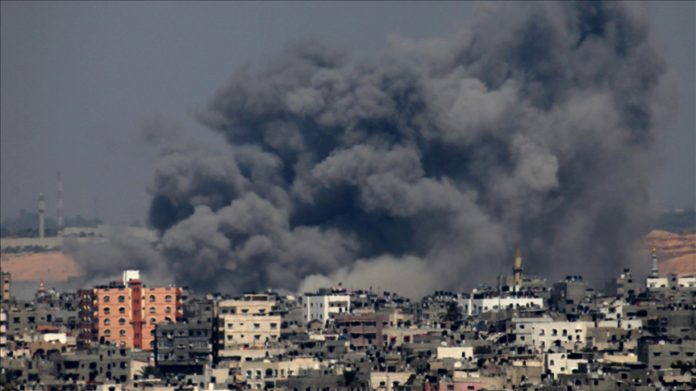 Seven years ago, when freelance Palestinian photojournalists Yasser Mortaja and Roshdi Sarraj decided to cover the Gaza War, they had no assurances they would ever survive the experience.

The war began on July 8, 2014, when Israel launched a ground assault in the Hamas-ruled Gaza Strip.

According to Amnesty International, a global human rights watchdog, over the next 50 days Israeli forces fired tens of thousands of artillery and tank shells into densely populated residential areas and conducted airstrikes killing more than 2,500 people, mostly civilians across the Gaza Strip.

Dodging bullets and mortars raining around them, they began covering the war from day one. On July 20, they joined a civil defense team that was heading to the east of the city in the Shajaiyeh neighborhood which was witnessing heavy fighting between Israeli forces and Hamas fighters.

While Mortaja is no more as he got killed in 2018 when he was 30 years old, Sarraj, 29, lives with the memories of the war and the works of his friend.

Speaking to Anadolu Agency from his home in Gaza, Sarraj said they saw civil defense teams removing the debris of residential houses, devasted by the aerial bombing and shells to find people.

Such was the destruction that Mortaja, who was born in the neighborhood, was unable to recognize the landmarks.

Their presence in the heart of the battlefield led them to document and click memorable pictures of the rescue of Mohammad Daher, his wife Shyamaa, and sister Beesan then nine-year-old from the debris of their bombed home.

“Since the moment he (Mortaja) clicked the paramedic getting Beesan out of the rubble, his strong, warm and safe relationship with Daher family also began,” said Sarraj.

50 days of death and destruction

Both the photographers spent 50 days together covering one of the dangerous wars in the world.

Both of them had earlier covered Israeli operations in 2012 as well.

“The coverage wasn’t easy because we were all the time living the challenge between the full coverage that we should do and the concerns of losing one of us if we were apart, covering from different locations,” said the photographer.

After Beesan was recovered from the debris, both the photojournalists used to visit her frequently to get her out of trauma, as she had lost her parents, brother, and sister.

After the 50-day war, Mortaja gifted a camera to Beesan, as he had begun to treat her as his sister.

In 2012, Mortaja and Sarraj had teamed up to document daily life in the Gaza strip from various perspectives. Besides covering 2012 and 2014 Israeli military operations, they also covered peaceful protests along the borders of the Gaza strip in 2018.

It was during one of these peaceful protests that Mortaja breathed last when he was shot by Israeli soldiers.

“Unfortunately, the ambitious and kind young man did not stay here long. We lost him early,” said a sobbing Sarraj, while describing the death of his friend.

While both of them had dodged the death together since 2012, Mortaja ultimately left alone. Sarraj at times feels that his friend is still around with his smiles and memories.

His death even sent Beesan once again to isolation.

“She’s afraid of any new relationship and is not accepting us as friends because she is concerned about the possibility of losing us,” said Sarraj.

During the 2021 Gaza War Sarraj missed his friend.

“This was the first war since Mortaja was not around with me. It was not easy to understand that he is not here,” said Sarraj, who wore his friend’s vest marked press and camera, while taking pictures during the recently concluded war.

Both of them over the years had built a team of photojournalists, who also missed their leader, who had a keen eye on details.

“He was our eye on the field, and during the latest war my eyes were on the camera to cover and on his memories to continue his message to the world,” said Sarraj.

Mortaja’s work has been acclaimed across the world. Sarraj said that his friends and the team he had cobbled up continue to carrying the message of deceased photojournalists to document and tell the world the real story of Gaza.