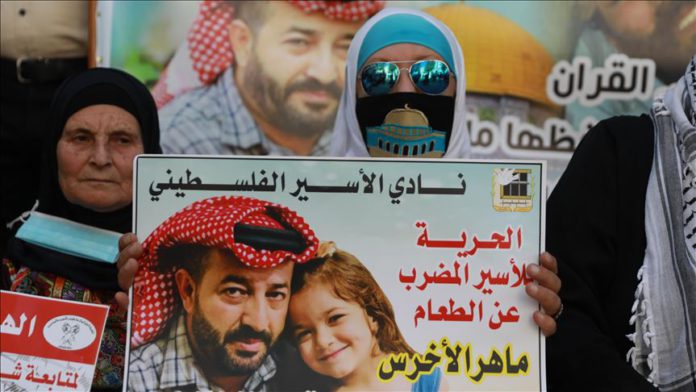 A hunger-striking Palestinian man imprisoned by Israel is reportedly suffering frequent and worsening shortness of breath, according to a statement on Wednesday by the Palestinian Prisoners Society.

Since Maher Al-Akhras has refused to undergo any health checks on his 94th consecutive day without food in protest of his jailing, no medical reports are available on the condition of his vital organs, the statement added.

Maher Al-Akhras is currently being held under “administrative detention” in Israel.

Despite his critical health condition, the Israeli prison authority, along with intelligence officers, attacked him on his hospital bed earlier in the week and exposed his family to insults and threats as well.

“A few days ago, a group of extremist settlers in the hallways of the hospital assaulted us with racist remarks — me, Maher’s mother and my sons. They threatened us aggressively,” wife Taghreed Al-Akhras told Anadolu Agency.

Maher’s attorney, Ahlam Haddad, told Anadolu Agency that she filed an appeal to the Supreme Court in Jerusalem, demanding her client’s immediate release and transport to his hospital in the West Bank. However, the court has yet to announce a ruling.

In Nablus, dozens of activities organized a vigil near Al-Najah National University in support of Al-Akhras and his family, with another organized in front of Kaplan hospital in Rehovot city, where Maher is detained.