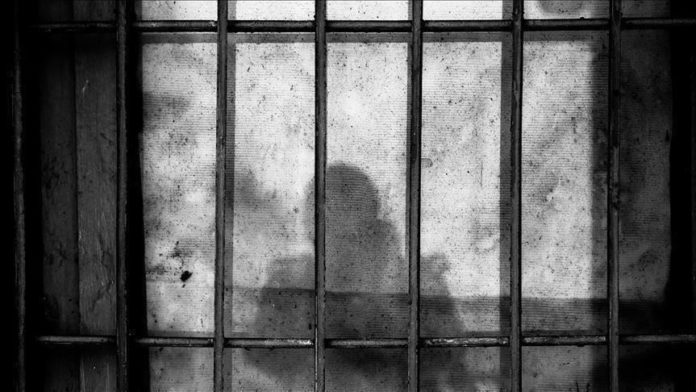 At the age of 37, Basem Khandakji, a Palestinian journalist has authored six books, including four novels and two poetry collections. He penned one of his novels Misk al Kifaya in just four months, setting a record in fast writing.

All these creative masterpieces have come from inside Israeli Jalbou prison, in the north of Jordan Valley, where Khandakji is serving three life sentences, for participating in the Second Intifada.

He was arrested and sent behind bars in 2004, at the age of 21, soon after he had graduated in journalism from Al-Najah National University. But the prison has failed to arrest his flight of imagination, which goes wild when he pushes pen on the blank paper.

“He was writing articles and short stories before his detention. In detention, he resumed writing, describing life in jail, producing prose, poetry and articles,” his brother Yousef told Anadolu Agency.

In Khandakji’s family library, near the old city of Nablus, in the northern West Bank, 49 kilometres (30 miles) north of Jerusalem, Yousef is busy in proofreading and readying manuscripts written by his brother for publishing.

The library was established in 1971 by their aunt Nadya Khandakji who was released from the prison that year after 18 months, because of her activities in Palestinian resistance. Once she established the library, her brothers Saleh, Adeeb and their sons helped to manage it. It has now grown into one of the major libraries and publishing houses in the West Bank.

“When I receive Khandakji’s manuscript, I consider it as an infant coming to the world after the pangs of childbirth. I spend many days admiring these papers that are smuggled out of the prison through an elaborate process,” said Yusuf.

He is currently busy proofreading the fifth novel of his brother, which will hit the stands soon.

Khandakji’s first novel came out in 2010. The papers were smuggled out from the jail and it was printed and distributed in Beirut.

“The papers are transported outside the jail with great difficulty. Sometimes jail administration discovers it, and they immediately punish the prisoners, having the manuscript,” said Yousef.

Once, while detecting his manuscript being smuggled out, the prison authorities confined Khandakji to solitary confinement and imposed financial penalty also.

”My brother has imagination and perseverance. He dreams of touring the world. The walls are the reality of his life, but they cannot arrest his imagination, which travels beyond. He lost his father at the age of 12 years, soon after his detention which was the hardest event for the family.”

The prisoner writer still does not know how his books are received in the Arab world. Many students from different universities in the Maghreb region and Jordan owe their degrees while reading Khandakji’s novels and poetry.

Speaking to Anadolu Agency, lawyer Hasan Abbadi narrates his meeting with the author inside the jail in June 2019. As a lawyer, he is allowed to meet inmates to prepare cases. But taking this cover, he had a specific purpose to see his favourite author.

The lawyer said Khandakji wished to have a cultural cafe in Haifa to discuss his works with the readers.

Books banned, but meet the author

The lawyer organized many programs to discuss Khandakji’s novels in Haifa and Amman as part of his initiative to support the Palestinian inmates who write behind the bars.

“He [Khandakji] does not write just about the suffering in jail. He writes about love and history.

We spoke about his imaginations that include travels to Paris, roaming in the streets of Jaffa, Beirut, and Haifa. We talked about the plot of his novels that combines past and present and tries to expect the future,” said Abbadi.

At one of the cultural events organized in Nablus, Abbadi said when one of the new Palestinian prisoners once asked the jail librarian Khandakji’s book, he was told that it was banned.

But the librarian, with a wry smile, told the new prisoner, that even if he does not get the book, he can meet the author in cell number 110.

'Vaccines far from being immune barrier against virus'