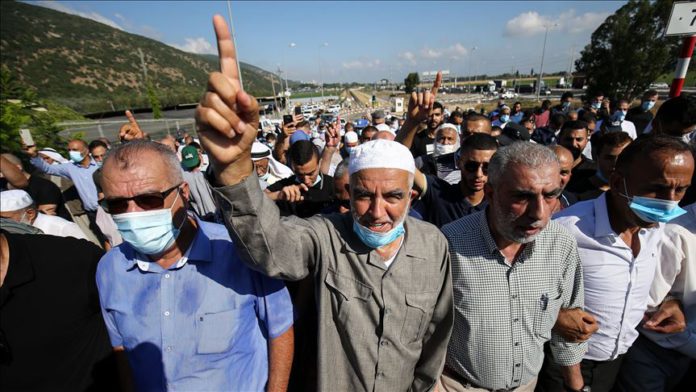 The sentence was scheduled to start in March, but was postponed due to the coronavirus outbreak.

Salah, the leader of the northern branch of Islamic Movement in Israel, was detained in August 2017 and indicted for incitement over his criticism of the erection of metal detectors at Jerusalem’s flashpoint Al-Aqsa Mosque compound.

He was sentenced to 28 months in prison by an Israeli court. He served 11 months in jail, half of which in solitary confinement before he was moved to house arrest.

“Salah was deprived of the right to pray in mosques since August 2017,” Zabraqa said. “Israeli authorities imposed many tight restrictions against Salah, including the deprivation of telephone calls or making speeches.”

In a statement, Salah’s defense team warned that the Palestinian leader’s health would be at risk due to the spread of coronavirus inside Israeli prisons.

Israeli prison authorities have not provided clear data about the number of coronavirus cases inside prisons.

Hundreds of Palestinians from Arab towns in Israel gathered outside AlJalmah Jail near Haifa to show support to the iconic leader.

“Salah’s prison sentence coincides with an unprecedented attack against Jerusalem and Al-Aqsa Mosque,” Sheikh Kamal al-Khateeb, the deputy head of the Islamic Movement in Israel, said.

He said the sentence also comes days after the announcement of a deal between the United Arab Emirates (UAE) and Israel to normalize their relations.

Born in 1958, Sheikh Salah is a poet and father of eight children. He started his public work as mayor of Umm al-Fahm, an Arab city in Israel, where he also became the leader of the northern branch of the Islamic Movement in Israel.

As his activities expanded and his anti-occupation speeches were disseminated widely among the Palestinian minorities in Israel, he was subject to arrests by the Israeli authorities several times.

In 2003, he was arrested on suspicion of funding Palestinian resistance group Hamas, while in 2005, he was banned from travel.

In 2010, he was sentenced to five months in prison for allegedly assaulting Israeli police.

A strong defender of the Palestinian people, he has staged a number of protests against Israeli policies and campaigned against the expansion of Israeli settlements in the occupied territories.