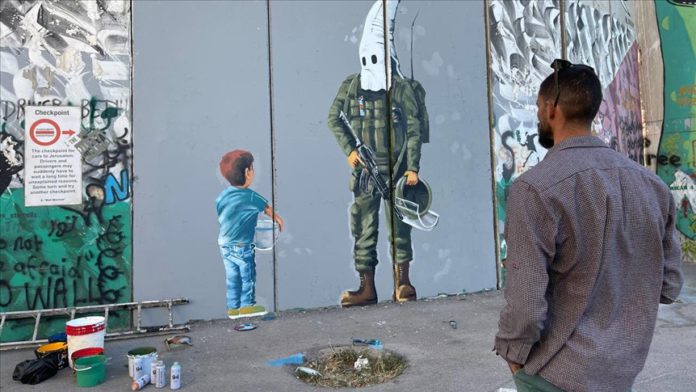 Last month, Israeli soldiers arrested Taqi Sapateen when he was drawing graffiti on the wall that separates the Palestinian area of West Bank from Israeli territories.

A contentious element of conflict, Israel describes it necessary security barrier, Palestinians call it a racial segregation or apartheid wall.

Dedicating his latest graffiti to newsmen, he painted the vest jacket on the wall, where journalists stand to cover the protests. But instead of writing press, he wrote stress.

“I drew the sniper’s lens against the journalists’ camera lens to tell the story without using words,” Sapateen told Anadolu Agency.

Soldiers grabbed the artist and took him to another side of the wall, that separates the main street connecting the city of Hebron to Jerusalem.

Sapateen recalled that he used to pass this street without any hassle before the separation wall came up with his father during his childhood to proceed to Jerusalem in a taxi, paying less than a dollar.

“Today, most Palestinian workers must pay hundreds of dollars to get an entry permit to pass this street to work in Jerusalem,” he said.

The Israeli intelligence officer accused him of damaging army property with his graffiti.

After several hours of interrogation, he was released, but not before warning him to stop painting the wall, as his brush is more dangerous than bullets.

“Our bullets stop on the body, but the effect of your brush travels all over the world, so it is a dangerous tool,” said Sapateen, while quoting the Israeli officer.

Raised in the Palestinian village of Husan, nine kilometers west of Bethlehem, the artist said during his childhood teachers spotted him mimicking drawings.

“Being with my father most of the time, on the fields, cafes, and the other social meetings, gave me a social knowledge that generated awareness about my land, and so to using art for messaging,” he said.

After he graduated from secondary school Sapateen worked as a construction worker to earn living. But he soon left the job and began studying contemporaneous visual arts in Ramallah, and started his own journey of reflecting imagination of his motherland in his creations.

After drawing hundreds of paintings, he decided to paint without a frame and talk to the world.

“I felt I need to be outside the frames, telling the story by a language that anyone from anywhere understands. At that point I decided to draw on the most egregious landmark, the apartheid wall,” said Sapateen.

He unleashed his imaginations to tell the story of the wall to the world. He first just put a mirror on the wall to enable tourists to see their images. He drew a painting of Alice in Wonderland, a fiction by English author Lewis Carroll authored in 1865 woven around a little girl Alice, telling the story of a magical wonderland from her dreams where she is reunited with her friends who make her realize her true destiny.

“Alice needed a chocolate to became smaller and pass from the hole, but here in Palestine the occupation has imposed an entry permit, military check posts to reduce our dignity,” he said while explaining the life of an ordinary Palestinian and Alice.

The Palestinian artist emphasized that he does not want to live as a victim, despite all the suffering.

“We are not a sad people, and we do not ask pity. We are a strong nation to live the life and keep our continuous struggle, despite attempts to obliterate our identity,” he said.

In another sketch using the famous game, Mario Bros as theme, where plumber Mario and his brother Luigi exterminate creatures emerging from the sewers by knocking them upside-down and kicking them away, Sapateen used it to highlight the tale of the Palestinian struggle, which does not have an endgame.

“As Palestinians, we do not have an endgame, all the time we have a tool to resist, our limit is just the sky,” he added.