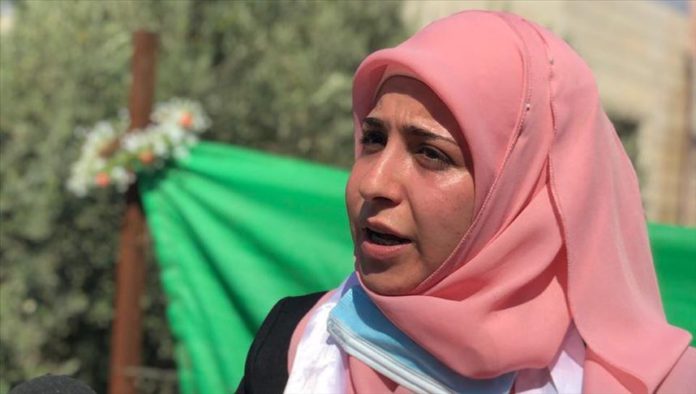 For over the past five years, Palestinian woman Bayan Faroun, 26, is hoping against the hope that one day her fiance Ahmed will emerge from the locked gates of Israeli prison to tie the nuptial knot.

Nine months after their engagement in March 2015, when families were preparing for their wedding, Israeli troops stormed Ahmed’s house and arrested him.

“He was sentenced to spend six years in prison. In March 2017, the army stormed my house as well and arrested me. I spent 40 months in an Israeli prison,” said Faroun, who hails from Al-Ezarieh, a town near East Jerusalem.

She was accused of participating in pro-Hamas activities in the occupied West Bank.

Faroun was elected the spokeswoman by the Palestinian women prisoners in Damon Jail near Haifa in 2018. She held the post until her release in July 2020.

Recalling her days in captivity, she said in April they held a peaceful protest in the prison yard demanding that they are allowed to call their families after the family visits were suspended due to the COVID-19 pandemic.

As many as 40 women prisoners, including 11 mothers had no information about their families and kids after the pandemic.

“After 10 hours in the yard, Israeli forces, who were surrounding us left the department and the administration approved our request to call our families, except for three prisoners for security reasons,“she said, adding that prisoners were concerned about their families after the outbreak of the pandemic.

Although allowing prisoners to talk to their families once, they continued to deny the supply of enough sanitizers and other material.

“They gave masks made of cloth. They were not medical fit masks. When I asked them to give us proper masks, their reply was there are no such masks so we must wash the cloth masks and reuse them,” she said.

Faroun said that seven prisoners, who were seriously injured at the time of their arrest were denied periodic health checkups. All that the doctors gave them were pain killers. The body of 34-year old Israa Jabees was burnt 60% at the time of her arrest. But she was not admitted to the hospital for undergoing surgery.

“The administration said that Jabees does not need these surgeries. Other women prisoners who required to be hospitalized for chronic diseases were disallowed to go to hospitals, “she added.

“The administration decided to transfer a prisoner to the isolation cell despite her critical health situation. When we protested, the forces beat us aggressively. Then they closed the cells and we were prevented from leaving to the yard many days,” narrated Faroun.

As a spokesperson of prisoners, she had to intervene at times and protect the girls from prison guards.

“When Ashraf Nalawah was assassinated, his mother was in prison and I had to inform her that her son became a martyr. She was shocked, screamed in the yard, and asked for going to home to see her son. The administration denied. All prisoners were crying at that moment,” she said.

Instead of consoling her, the jail officials were trying to provoke her by rejoicing and smirking at her.

Israeli prison authorities recently banned the International Committee of the Red Cross (ICRC) to distribute books to prisoners. Earlier, they used to get books from their families during visits. The practice was discontinued due to pandemic.

“The administrative authorities were obstinate and refused to open the library in the department. After many sessions, the Central Court in Haifa rendered a judgment to open the library, but it still needs further books,” she said.

While time flies in the free world, it comes to a screeching halt inside the jail. So what prisoners do to spend time to keep minds distracted from disturbances?

Faroun recalled that prisoners used to invest their time learning Arabic calligraphy, languages, and handicrafts. But these activities also were interrupted at times.

“The authorities recently disallowed colored yarns and beads for making handicrafts. The administration did not approve our request to buy them from the canteen,“ she said, adding that prisoners were planning to lodge an affidavit in the court through their representative against the order.