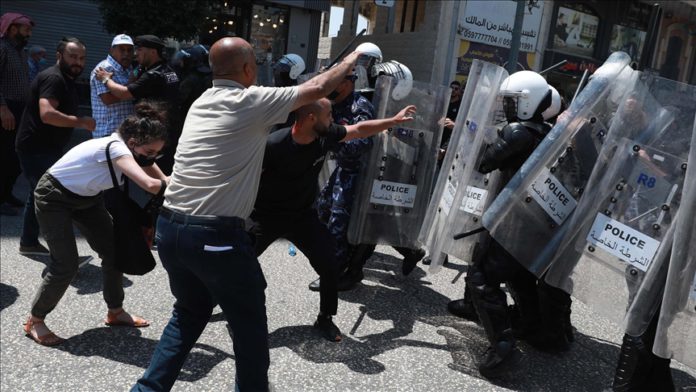 The Palestinian security forces on Thursday dispersed a rally in Ramallah, central West Bank, protesting the death of a Palestinian activist and an outspoken critic, Nizar Banat, in custody.

Eyewitnesses told Anadolu Agency that the security forces fired teargas canisters and beat dozens of activists to disperse the rally.

During the rally, Palestinians raised photos of Banat and accused the Palestinian security forces of killing him.

Meanwhile, the Palestinian government announced forming an independent committee to look into the circumstances of Banat’s death following his arrest by Palestinian security forces.

The Palestinian government said the committee, having Ammar Dweik from the Independent Commission for Human Rights and a doctor from Banat’s family as members, will be headed by Justice Minister Mohammed al-Shalaldeh.

Early on Thursday, Hebron Governor Jibreen al-Bakri announced the death of Banat after his arrest by Palestinian security forces from his home in Hebron, southern West Bank.

Banat’s family accused the security forces of beating him to death when they arrested him at dawn on Thursday.