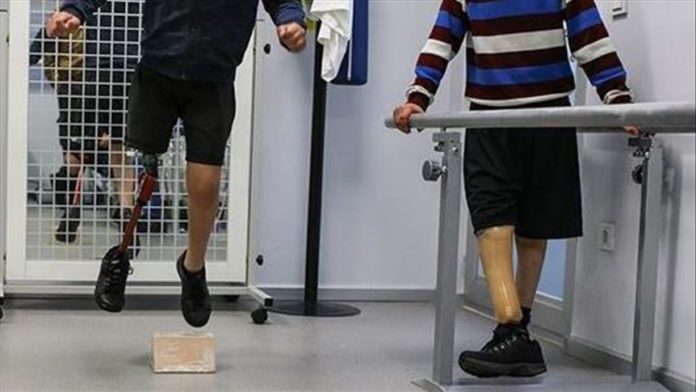 A recreational camp for amputees of all ages is being organized in the Gaza Strip by the US-based Palestine Children’s Relief Society organization.

The summer camp, which is taking place in a seaside resort, includes a number of sports and cultural activities, such as swimming, arts and crafts, candle making, as well as cultural and social competitions.

Speaking to Anadolu Agency, the project coordinator, Hadeel al-Saqqa, said the five-day camp started on Sunday and will continue until Thursday.

“This project targets 80 people, including children and youth of both sexes who have amputations of the upper or lower limbs,” al-Saqqa said, adding that it doesn’t matter whether the amputation was caused by Israeli shelling or accidents.

She also underlined the importance of the camp in providing the amputees with a chance to engage in various activities.

For his part, Abdul Aziz Abed, the association’s media official, told Anadolu Agency that the camp seeks to “break the barriers of shame and fear among the amputees.”

The camp “aims to reintegrate them into society, and not to treat this amputation as a barrier that prevents them from practicing various activities and continuing with their lives,” he said.

Abed noted that older amputees in their 50s are also taking part in the camp as a way of “inspiring children” not to be ashamed of their amputations.

According to Abed, the relief organization has been operating in the Palestinian territories since 1991.

At least 260 Palestinians were killed and thousands injured in 11 days of Israeli airstrikes in the Gaza Strip in early May against the backdrop of an Israeli court ruling to evict Palestinian families from their homes in the Sheikh Jarrah neighborhood in occupied East Jerusalem.

Thirteen Israelis were also killed by Palestinian rocket fire from Gaza. The violence came to a halt under an Egyptian-brokered cease-fire that came into effect on May 21.