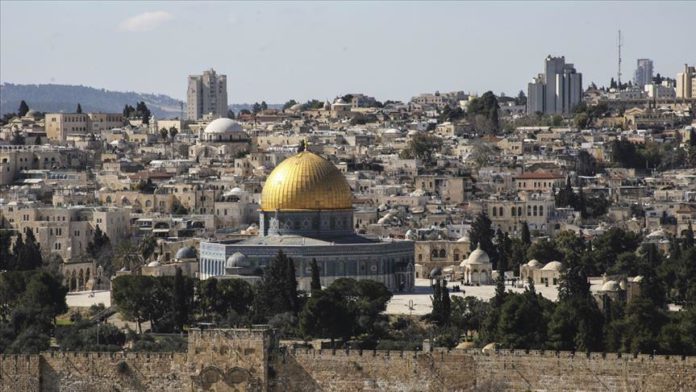 On special days and functions, Hanady Halawani heads to the Al-Aqsa Mosque in Jerusalem with her husband and children to pray.

While her family enters the mosque, Hanady remains outside, instead of having to pray near the northwestern Lions Gate, as she is restricted by Israeli authorities from entering it.

“My house lies a few meters away from the mosque, the Muslims flock in front of it on their way to the prayers but I can’t set foot inside [Al-Aqsa] because of the continuous expulsion orders with very restricted mandatory requirements,” says Hanady, a 40-year-old teacher who has been mired in a trial since 2012.

That year, Israeli authorities initiated a systemic drive targeting dozens of Palestinian women activists who stood up to Israeli settlers storming Jerusalem’s Old City and the Aqsa Mosque compound in an effort to supplant its native Palestinian population.

These activists were arrested, deprived of national health insurance despite the illnesses some of them suffered from, and were slapped with a travel ban, continuous restrictions and threats.

“I couldn’t remember the number of assaults, the last one was a decision made by the Israeli Interior Minister two weeks ago that barred me from traveling for six months, which may be extended,” said Hanady, who was threatened directly by the Israeli intelligence to deport her as punishment for her political activities.

On May 31, 2020, the Al-Aqsa Mosque reopened after two months of closure as a precautionary measure during the COVID-19 outbreak.

Since then, the measures have become even more restricting against Palestinian prayers.

Sondos Ewies, a Palestinian journalist from Jerusalem who was arrested on the day of the reopening of the Al-Aqsa Mosque because of her reporting on the compound, was expelled a week later by the Israeli intelligence for a minimum of three months.

In 2015, the Israeli police named 50 blacklisted Palestinian women considered by Tel Aviv to be dangerous activists. Most are still prohibited from entering the mosque since that date.

“Between 2016 and 2020, I was allowed to pray in my holy mosque for only 60 days in four years. The current expulsion order lasts more than 18 months,” said Hanady.

Dozens of times, Israeli forces stormed Hanady’s house, with most raids conducted in the middle of the night. Police and intelligence officers knowingly destroyed furniture and confiscated property like laptops, smartphones and any storage devices, she told Anadolu Agency.

“I was quarantined last July. Despite this, the forces stormed my house at dawn and arrested me. The next day at trial, a policeman entered the hall and wrote a violation against me. They accused me of not abiding by quarantine,” said Hanady, who was also subject to financial strain due to the monthly assaults on her home.

“Tens of soldiers stormed my home to threaten me to stop my activity on social media. I said to the officer, you can call me and say this on the phone, there’s no need for these forces. He replied: ‘You’re the most dangerous woman in Jerusalem, you deserve these forces to scare you.'”

Unable to count how many times she was arrested, Hanady said this systematic targeting was abnormal and harmful for her children, who no longer felt secure.

The arson attack was one of several assaults on the flashpoint site since Israel’s occupation of East Jerusalem in 1967.

For Muslims, Al-Aqsa Mosque represents their third holiest site. Jews, for their part, refer to the area as the Temple Mount, claiming it was the site of two Jewish temples in ancient times.

Novak Djokovic did his best to play in Australian Open, Serbian...