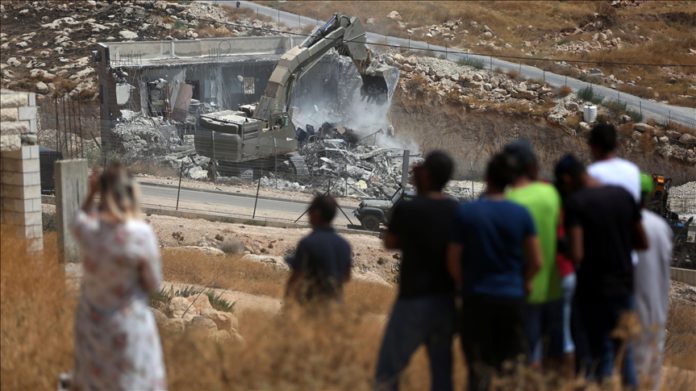 Israel aims to create a new reality that makes realizing the two-state solution and Palestine’s sovereignty over its territories impossible, said Palestinian Presidential Spokesperson Nabil Abu Rudeina in a statement.

The Tel Aviv administration is targeting around 30 Palestinian families in East Jerusalem who were ordered to be evicted from their homes in favor of far-right Jewish settler associations, said Abu Rudeina.

He also called on the international community to urgently intervene and take concrete and immediate measures to deter Israel and stop its violations.

In November, the Israeli Central Court in Jerusalem rejected the zoning permit application of a group of Palestinian families who had lived in East Jerusalem’s Silvan neighborhood since 1963.

According to a report published by the National Office for Combating Settlements and Land Defense affiliated with the Palestine Liberation Organization (PLO), the Israeli court’s decision means that 30 Palestinian families will be fined $200,000 and evicted from their homes.

The Israeli authorities have threatened to demolish thousands of homes belonging to Palestinians in East Jerusalem, which is under occupation, claiming they are unlicensed.

According to a report by the United Nations Office for the Coordination of Humanitarian Affairs (UNOCHA), Israeli authorities have demolished at least 90 homes in East Jerusalem since the beginning of 2020. Accordingly, more than 100 Palestinians were left homeless.

Noting that there is no legal basis for implementing such measures, Palestinians say that it is “part of Israel’s policy of intimidation and Judaization of the city.”

The Israeli municipality often collects demolition costs from the people whose homes were destroyed.