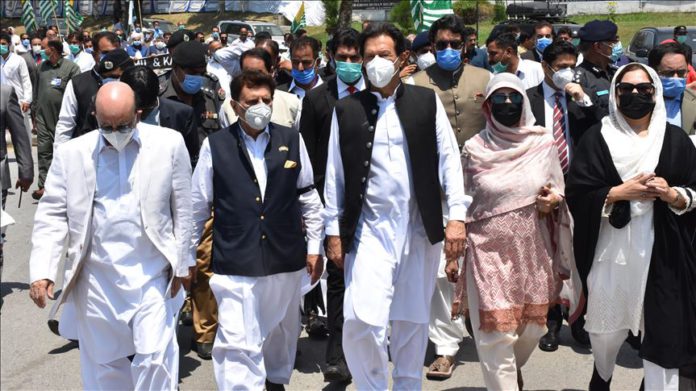 Pakistan’s ruling party is leading in Sunday’s elections for the third legislative assembly in northern Gilgit-Baltistan region, according to unofficial results on Monday.

Prime Minister Imran Khan’s Pakistan Tehreek-e-Insaf (PTI), which was in the lead with at least 12 of the 24 seats in the Gilgit-Baltistan Legislative Assembly till Sunday night, is now leading on nine seats, Radio Pakistan reported.

Seven seats have been clinched by the independent candidates, giving them a significant importance vis-a-vis formation of the new government for the next five years.

Majlis Wahdat-e-Muslimin, a Shia political group and a ruling party ally, managed to secure only one seat.

Over 700,000 voters cast ballots for 23 of the 24 seats up for grabs in the region’s Legislative Assembly, according to election authorities.

Voting for one seat was postponed after the death of a candidate.

PTI and allies have brighter chances of forming the new government as the majority of independent candidates are likely to join them as per the region’s political tradition.

Independent lawmakers have previously sided with the party that has been in power in Islamabad.

The ruling party and its allies need only two more seats to attain a simple majority.

The first two elections in the region were won by the PPP and the PML-N while they were in power in Islamabad in 2009 and 2015 respectively.

The PPP and the PML-N have cried foul, accusing the election authorities of “rigging.”

The federal government and the election authorities however, denied the charge, advising the opposition parties to contact the election commission if there are any irregularities.

Hundreds of PPP workers led by the party Chairman Bilawal Bhutto Zardari staged a sit-in outside the election commission office in Gilgit on Monday against alleged rigging.

Addressing the protesters, Bilawal accused the federal government of “stealing” the hotly-contested polls.

“My election has been stolen. I will be joining the people of Gilgit-Baltistan in their protest shortly,“ he tweeted minutes before joining the protest.

“Neither did the PTI have any existence in GB [Gilgit-Baltistan] previously nor would it have one now,” daughter of the three-time Prime Minister Nawaz Sharif said in a series of tweets.

“[A] few seats won by the PTI through begging was due to force, rigging, and breaking away PML-N candidates,” she added.

Debunking the opposition’s allegations, Federal Information Minister Shibli Faraz said at a news conference in Islamabad that the elections were “very transparent.”

If PTI, he contended, wanted to rig the elections, it would have won at least 14-15 seats instead of nine.

Gilgit-Baltistan is a strategic area for Pakistan, bordering China and serving as a key route for the multibillion-dollar China Pakistan Economic Corridor.

Formerly known as the Northern Areas, Gilgit-Baltistan is located at the confluence of the world’s greatest mountain ranges – the Karakoram, the Himalayas, the Hindu Kush and the Pamir.

Rich in history, culture and natural beauty, Gilgit-Baltistan region, has been a paradise for trekkers and adventure tourists for centuries.​​​​​​​