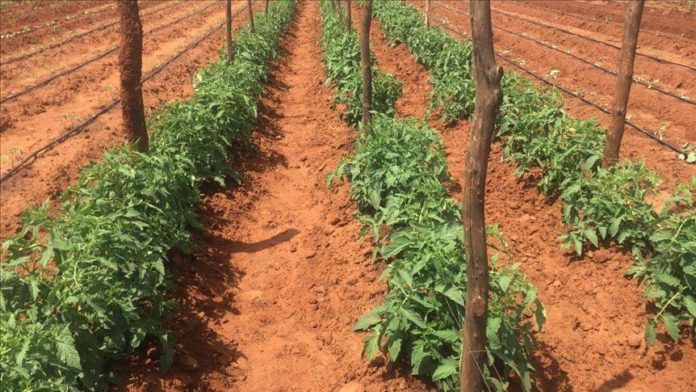 A mounting housing crunch is fast devouring Pakistan’s agricultural lands, which may have cascading effects on the country’s food security in years to come.

The increasing population and housing needs have already turned large swathes of green lands, not only in big cities but in small districts, into concrete jungles in recent years in northeastern Punjab and southern Sindh provinces, which are considered the country’s two main bread-baskets.

Standing outside a gated housing scheme in a northern village 10 kilometers (6 miles) from the downtown of northeast Faisalabad, it is hard to imagine that the modern villas have been built on agriculture fields, which produced wheat, sugarcane, and other seasonal crops and vegetables, apart from being fodder for animals until just a few years ago.

Guarded by smartly-turned security guards, it is one of the hundreds of similar schemes that have recently sprung up in and around the country’s textile hub on farmlands and orchards for more than a decade.

“Hundreds of farmers sold out their farmlands to the real estate developers in recent years, which has resulted in the form of these posh villas in and around the city,” Nadeem Shahid, a resident of the village told Anadolu Agency.

“Now [after selling farmlands], not only people like us but farmers themselves buy wheat, flour, and vegetables from the market,” he said.

“I don’t know how long the remaining farmers would resist?” said Shahid, pointing to a nearby field where a group of farmers was plowing for the next crop.

The situation is no different in the nation’s capital Islamabad, the commercial capital in Karachi, the cultural hub of Lahore, and other cities, where large sections of once lush green fields and jungles have been turned into housing schemes.

According to Shaukat Ali Chadhar, secretary-general of the Kisan (farmer) Board of Pakistan, a non-governmental agricultural advisory and research organization, around 20% to 30% of fertile land in Punjab province, which makes up 65% of the country’s total food requirement, have been converted to industrial units and housing schemes.

In Lahore alone, he said 70% of agricultural land has been converted to housing and industrial units, followed by Gujrat where the ratio is 60%.

“In Lahore, the remaining 30% of fertile lands are safe just because of security reasons as they are located near the border with India,” he said.

In other agriculture districts in central Punjab-also known as mercantile Punjab, like Faisalabad, Gujranwala, Sheikhupura, and Kasur, 30% to 40% of fertile land have been sold to real estate developers and industrialist, he added.

The land-holding ratio, he observed, is still satisfactory in southern Punjab and the northern district of Sindh, which together is currently producing more than 50% of the country’s wheat, sugarcane, and cotton.

The fast-increasing sales of fertile land and the government’s “discouraging” attitude toward farmers are going to lead to serious food security issues in coming years, Chadhar warned.

“Agriculture is no longer a profit-making business in countries like Pakistan, where the governments tend to fill the pockets of a few rather than benefitting and encouraging the whole agriculture sector,” he said while criticizing the government’s decision to import wheat to cope with a possible crop shortage.

“The government is importing wheat from Ukraine and Russia at much higher prices but not ready to give that support price to local farmers. It [government] is discouraging farmers, forcing them to sell their land and look for other businesses,” he said.

“If this trend is not checked immediately, mark my words, we will have to face serious food security issues in coming years,” he warned.

Asked if there should be a ban on the sale of agricultural land for commercial purposes, he said: “How can we demand or expect from small farmers not to sell out their lands when the government is giving them no incentives, and at the same they are getting triple the price.”

Echoing food security concerns, Javed Humayun, senior joint secretary at the Ministry of National Food Security and Research said the government is “worried” and “fully aware” of the rising phenomenon of construction on agricultural lands.

“Deliberations are ongoing to find a solution to this serious problem,” Humayun told Anadolu Agency while noting there is currently no law that bars the use of agricultural lands for housing purposes.

The government, he said, has already supported the idea of constructing high-rise buildings in the city to cope with the housing crunch.

“Building of these housing societies has nothing to do with the country’s housing problem. They are not meant for poor or low-income people but for the rich, who find it the best way to launder their black money or buy plots for investment purposes,” Hasan told Anadolu Agency.

Last April, the government announced there would be no question about the source of income in cases of investment in the construction industry.

If the government wants to address the housing issue, said Hasan, it has enough land to develop low-cost housing schemes for the poor, even in the big cities.

“In Karachi alone, the government has its own 4,000 Acer land, where it can develop low-cost housing schemes to benefit the poor, who actually deserve that,” he said.

Recently, pictures and videos of trucks filled with logs and felled mango trees, which were cut down to develop a housing scheme in northeastern Multan went viral on social media networks, inviting anger from environmentalists and citizens.

Multan is known as Pakistan’s “mango city” because of the production of several kinds of famed fruit, mainly Chaunsa.

Also, the government’s plan to build a new city on twin islands in the Arabian Sea has drawn scathing criticism from environmentalists, who see the ambitious project as a “serious” threat to the entire regional ecosystem.

Located 3 nautical miles west off of Karachi’s coast, Bundaal and Bundu, serve as a natural bulwark against cyclones and tsunamis apart from being a famous destination for hundreds of thousands of migratory birds from Siberia.

The government plans to connect the islands with Karachi’s coast through a bridge after converting them into a lavish offshore development.

It all comes when the government of Prime Minister Imran Khan is taking credit for a much-publicized “billions tree” project, which aims to mitigate climate change and environmental issues, which the South Asian nuclear nation has long faced.

“This is a very dangerous phenomenon as it will not only affect the national food security but the environment as well,” Shabina Faraz, a Karachi-based environmentalist told Anadolu Agency.

“Pollution and smog have already touched alarming levels due to unplanned urbanization. Further constructions on forest and agricultural lands will leave us nowhere [in terms of the environment],” she said.