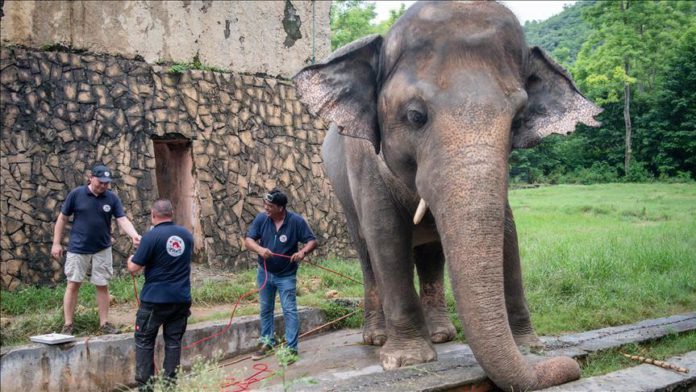 Pakistan’s “lonely” elephant Kaavan has come one step closer to his rescue after a team of wildlife experts declared him “well enough” to be relocated to a sanctuary in Cambodia.

“Following the checks, which confirmed Kaavan is strong enough, steps will now be taken to finalize his relocation to an animal sanctuary potentially in Cambodia,” said a statement on Saturday by Austrian-based FOUR PAWS International, a global animal welfare organization which examined Kaavan in the capital Islamabad to see if he is fit to travel.

Pakistan’s ‘lonely’ elephant is fit to be moved

“Due to malnutrition and lack of physical exercise, Kaavan shows visible signs of obesity. Also, his nails are cracked and malformed which can be attributed to the inappropriate flooring and structure of his enclosure. To solve this issue, he needs to go through a long-term foot care program, which cannot be performed in Marghazar Zoo” in Islamabad, said Dr. Amir Khalil, FOUR PAWS veterinarian and mission leader.

Dr Frank Goritz, head veterinarian at the Leibniz Institute for Zoo and Wildlife Research (IZW) in Berlin, added: “A lack of physical and behavioral enrichment as well as the absence of a partner, have resulted in Kaavan becoming incredibly bored. He has already developed stereotypical behavior where he swooshes his head and trunk from side to side for hours. Overall, the results from his blood tests are good and his general health condition allows him to be relocated.”

The Islamabad High Court in May ordered wildlife authorities to free and transport Kaavan, who has been lonely following the death of his partner Saheli (meaning “friend”) in 2012.

Given by the Sri Lankan government in 1985 as a calf only a year old, Kaavan became the subject of a high-profile rights campaign after it was revealed in 2015 that he was regularly being chained for several hours a day.

Pictures of Kaavan in shackles ignited a global outcry, one also backed by American singer Cher, for his release to a sanctuary. Activists also filed a petition in 2016, backed by over 200,000 across the globe.

Many described Kaavan as “Pakistan’s loneliest elephant,” urging authorities to set him free and relocate him to a sanctuary amid his deteriorating health.

Besides Kaavan, FOUR PAWS is also supporting the relocation of two former dancing bears kept in Marghazar Zoo. One of them, 17-year-old Suzie, is in critical condition after a tumor was surgically removed. FOUR PAWS offered to bring the bears to its own sanctuary, run with Princes Alia Foundation, in Jordan. The decision on the other zoo animals’ final destinations is still pending.

US sanctions 4 individuals linked to Russia over Ukraine