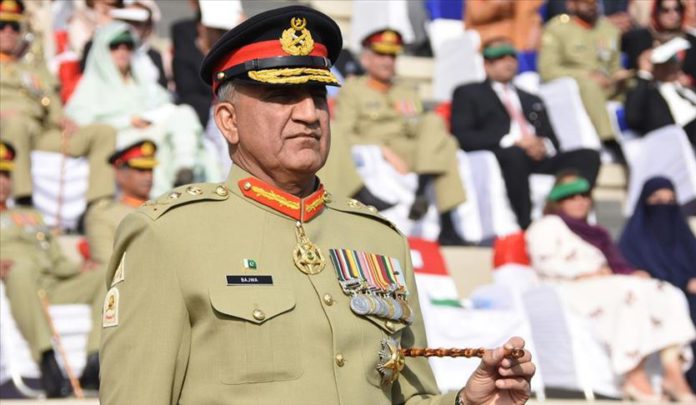 Although the official line was that the visit was “pre-planned,” many saw it as an attempt to allay Riyadh’s ire over rare criticism from Islamabad of the Kingdom’s lukewarm reaction to the situation in disputed Jammu and Kashmir.

Earlier, on arrival, Bajwa was received by Al-Rowaily at the Defense Ministry, where a guard of honor was also presented, according to the statement.

No further details were given.

Earlier this month, Pakistan’s Foreign Minister Shah Mehmood Qureshi asked the Riyadh-dominated Organisation of Islamic Cooperation (OIC) to stop dilly-dallying on convening a meeting of the group’s Council of Foreign Ministers on Kashmir.

He warned that if the OIC fails to do so, “I will request my prime minister to convene the meeting of those Muslim countries, which want to support us on the Kashmir issue, whether it will be through the OIC or any other forum.”

Pakistan, he said, skipped a summit in Malaysia last year with a “heavy heart” because of Saudi Arabia’s reservations, so now it was time for Riyadh to step forward.

Pakistan last month had to borrow $1 billion from China to repay part of $3 billion loan from Saudi Arabia to prop up Islamabad’s depleting foreign reserves, apart from a $3 billion oil credit facility.

The Finance Ministry last week confirmed that Riyadh was reviewing Islamabad’s request for an extension of the oil credit facility, which ended in July.

Huge amounts of money sent by expatriates in Saudi Arabia, the United Arab Emirates (UAE), Kuwait and other Gulf states have a significant effect on Pakistan’s economy.

Saudi Arabia, where 1.9 million Pakistanis reside, tops the list of countries with the highest remittances to Pakistan at more than $4.5 billion annually, followed by the UAE, with in excess of $3.47 billion, according to official statistics.