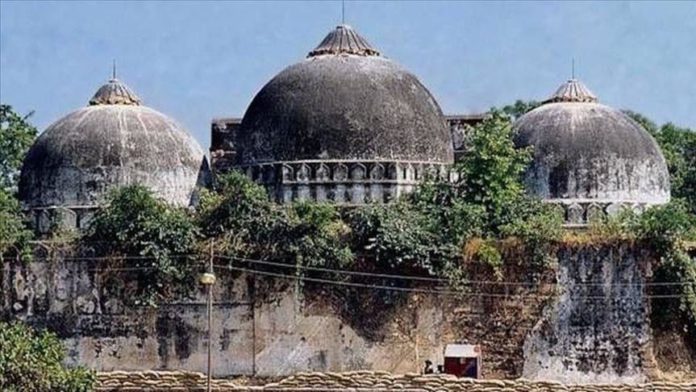 The acquittal of all 32-surviving accused in the Babri Mosque demolition conspiracy case in India on Wednesday has refreshed memories of Hindus in Pakistan.

On Dec. 6, 1992, soon after the news of the demolition of the historic mosque spread, charged Muslim mobs, calling for revenge had attacked dozens of Hindu temples across Pakistan.

Some 30 temples across Muslim-majority Pakistan were attacked, 25 of them across the southern province of Sindh, where 85% of the Hindus in Pakistan live.

Since then all these temples have been either rebuilt or repaired in Pakistan in contrast to India, where also then Prime Minister P. V. Narasimha Rao had pledged to rebuild the Babri Mosque, in his televised address to the nation.

Speaking to Anadolu Agency, Surendar Valasi, a Hindi lawmaker belonging to center-left Pakistan Peoples Party (PPP) said it was a “sad day” for all Pakistani Hindus.

“Instead of repairing the damage done to the Babri Masjid, they are building a Hindu temple, where the majority of Dalits [lower caste] won’t be allowed to enter for worship like elsewhere,” he said.

On Wednesday, Judge SK Yadav supervising a special court in the Indian city of Lucknow acquitted all accused who were facing trial for engineering conspiracy for pulling down the mosque by a frenzied mob in Ayodhya.

Valasi said the verdict should have taken a queue from Pakistani governments, who repaired and rebuilt damaged temples.

“In Pakistan, the temples and worship places of minorities were repaired and restored on government expenses. Being the large country in the region, India should promote religious harmony in the region and protect its minorities to create an example for other neighbors to follow,” said the Pakistani Hindu lawmaker.

He said India’s actions were endangering all minorities in South Asia.

In February this year, the Pakistan government handed over a 200-year old temple to the country’s Hindu minority.

Located in the remote Zhob district of the southwestern Balochistan province, the temple had been illegally occupied in 1947 following the partition of the Indian subcontinent, which prompted a large-scale migration between Pakistan and India.

Hindus, the largest minority in Pakistan, make up 4% of the country’s more than 200 million population.

Pakistan is home to several sites revered by Hindus. The Katas Raj temple in the northeastern Chakwal district and Sadhu Bela temple in southern Sukkur district are the two most visited rites by Hindus across the world.

According to local media, the government plans to reclaim and restore 400 temples, which have been illegally occupied by land grabbers, to Hindus across the country.

Many experts find parallels between a Sikh place of worship Gurdwara in Lahore and Babri Mosque case in India.

Located in the heart of Pakistan’s second-largest Lahore city, Shahid Ganj Gurdwawa was a source of discord between the two communities.

Constructed by Kotwal (Chief Police Officer) of Lahore Abdullah Khan, during the reign of Mughal Emperor Shah Jahan in 1653, Shahid Ganj was a mosque till 1799, till Sikh Army under Maharaja Ranjit Singh captured the city defeating Afghans. They converted it into a gurdwara and barred entry of Muslims.

In 1849, when the British took control of Lahore by defeating the Sikh Empire, Muslims pleaded for the return of the mosque and knocked on the court. But the court using the law of limitations, rejected the plea and questioned the delay of 51 years for claiming the mosque. The London-based Privy Council, the highest court of appeal during the British era also rejected Muslim claim on May 2, 1940.

The law of limitations set by the British and then adopted by India in 1963, stipulates a maximum period of 12-30 years to claim immovable properties from adverse possession. According to lawyer Anubhav Pandey, this law intends that “controversies are restricted to a fixed period, lest they should become immortal, while men are mortal”.

In 1850-1935, Lahore and adjoining areas of Punjab province witnessed the worst communal riots, between Sikhs and Muslims on the Shahid Ganj. In 1935, the British Governor of Punjab, Sir Herbert Emerson suggested that the site be handed over to Archeology Department to be declared as a protected site, as a mid-way to settle claims. When the issue was being discussed, a Sikh mob in the dead of night demolished the structure, removing traces of a mosque.

The Babri Mosque is said to have been built by an official of Mughal Emperor Babur in 1528.

In 1885, a Hindu religious body filed a case in Faizabad court asking for permission to construct a temple to honor Ram on the premises of the Babri Mosque. The permission was denied.

In 1949, a group of Hindus entered the premises of the mosque and installed an idol of deity Lord Ram. Instead of removing the idol, the administration locked the mosque. However, an official and a Hindu priest were given the charge to look after the place.

In 1986, the district administration of Faizabad, under which Ayodhya city comes, opened the premises to Hindus, allowing them to carry out rituals.

The situation remained calm until December 1992, when thousands of activists belonging to extremist Hindu groups and political parties along with BJP leaders entered the Babri Mosque and demolished it.

The Indian Supreme Court in November last year handed over to a Hindu trust to build a temple on the Mosque site.

US: Australia to investigate attack on its journalists